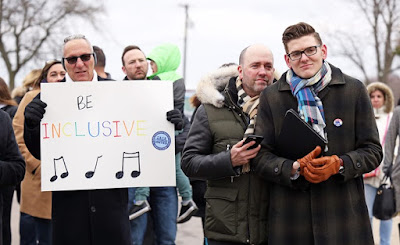 ICYMI: The Episcopal Church's Task Force on the Study of Marriage (TFSM) -- convened by our 2015 General Convention -- requested feedback from our wider Anglican Communion cousins on the following question:


From your perspective and specific setting, what has been the impact of The Episcopal Church’s authorization and use of liturgical rites for same-sex marriage and the blessing of same-sex unions on “the Church”?

It also turns out it was not roundly representative of many voices in the Church of England who have subsequently stepped up and spoken out to challenge Mr. Nye's authority to speak for the whole church and applauded the leadership of TEC in moving forward toward fuller inclusion of LGBTQ people in the Body of Christ.

From 113 church leaders: We have read William Nye’s letter to the Episcopal Church in the United States (News, 20 April) with considerable interest, surprise, and, to be honest, disappointment, and wish to dissociate ourselves from it. The letter refers to a majority belief in the Church of England that the only legitimate locus for sexual relationships is within heterosexual marriage. This sweeping assertion cannot, in fact, be substantiated, as the Church of England, to our knowledge, has never asked her regular worshipping community what it thinks and believes about this.

From 14 members of the General Synod Human Sexuality Group: The letter was not reported to the General Synod in February, nor published by the Church of England. Thanks to the Episcopal Church’s culture of openness, we now know of the letter’s existence and contents. Mr Nye asserts that for a majority in the Church of England “Holy Scripture is held to rule that sexual activity outside marriage between a man and a woman is contrary to God’s will.” It is not clear what steps he took to ascertain whether this is indeed the majority belief, and recent research surveys suggest that it is not.

From General Synod member Anthony Archer: The Episcopal Church’s consultation is a clear reminder of the autonomy of each Province of the Anglican Communion in shaping its own doctrine and affairs, autonomy that will become starker if the Episcopal Church has to face further “stringent consequences” for its prophetic lead. It is time the Church of England adopted that position rather than hide behind its de facto position in the Anglican Communion and wring its hands on the basis that it can do nothing until all other Provinces agree (in other words do nothing).

Then there's this response from One Body, One Faith ...

For decades we have watched the Communion used as an excuse for our failure to acknowledge the diversity of views in the Church of England, and to speak with integrity and courage the truth of our people. Now, as another province embarks on a different way of making gracious provision for diversity of integrities, it appears they are being blamed with impacting on the work of the working groups set up by the House of Bishops in the aftermath of the disastrous GS2055. The members of those groups with whom we’ve been able to engage are working courageously and prayerfully to hold in tension their various perspectives and to make room for meaningful change. It is disingenuous to seek to draw TEC into submission to the Church of England suggesting that this is for the sake of the Communion. TEC, the discernment and reception process are bigger than that, as is the provenance of the Holy Spirit.

This flurry of activity is more than just a tempest-in-a-teapot over Mr. Nye getting out over his skis and presuming to speak for the whole CofE.

It is a reality check to all of us who prepare to gather in Austin for our 79th General Convention and consider the proposals from the TFSM that diversity of opinion on issues relating to marriage exists in absolutely every part of our wider Communion.

It is a reminder that in spite of the threats of schism and the end-of-the-world-as-we-know-it ... which seem to return to General Convention debates as regularly as the swallows return to Capistrano ... differences do not inevitably lead to division.

And it is an opportunity for us to continue to "set our hope on Christ" as we move forward with the work of making full and equal claim for God's beloved LGBTQ people not just a resolution we once adopted but a reality we actually live.
Posted by SUSAN RUSSELL at 10:11 AM