Nothing "puts the Christ back in Christmas" like attacking gay people!

Because there's no greater challenge to "Peace on Earth, Goodwill to All" than the lesbian couple down the street. Seriously!! 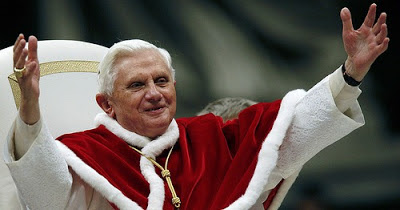 At his annual Christmas speech to the Vatican, Pope Benedict XVI called same-sex marriage a “manipulation of nature” to be deplored and an attack on the “essence of the human creature.”

It was the second time this week that Benedict took aim at marriage equality:


People dispute the idea that they have a nature, given to them by their bodily identity, that serves as a defining element of the human being. They deny their nature and decide that it is not something previously given to them, but that they make it for themselves.

The manipulation of nature, which we deplore today where our environment is concerned, now becomes man’s fundamental choice where he himself is concerned.

Read the rest here ... and [for the record] I do not in any way "dispute" the idea that we have a nature that serves as a defining element of the human being. However, I believe that our sexual orientation is morally neutral and does not define us but is part of what equips us to live our lives in alignment with God's love, justice and compassion. And so what I DO dispute is the prerogative of the Bishop of Rome to project his homophobia on to what defines me as a human being. And that is -- quite simply and rather traditionally -- "created in the image of God and called to walk in love as Christ loved us." Not your job, Dude: back off!
Posted by SUSAN RUSSELL at 10:14 AM

If there was ever a guy who should take a permanent vow of silence on anything related to human sexuality, it's this guy.

This man is really SICK! The fact that RCs do not openly revolt against such thinking is downright scary!

As a former Roman Catholic, I'm embarrassed by his actions. It's clear why the people do not follow his words.

Benedict has a history of worrying about other people's sins while ignoring his and his institution's own. At a time when his bishops are being tried and convicted for concealing sexual predators, when the Vatican continues to harbor Cardinal Law, and church membership is in world wide collapse, he is busy complaining about +Mary's sexuality, crying about the sexuality of those few who still seek the Christian community's blessing on their union, and making certain the church keeps women in subordinate roles. He needs a mirror, not a telescope!

I left the Catholic church 2 years ago and have been looking for a new faith/church. You have no idea how hard it is to leave the church you grew up in.
Lots of my friends are staying to try and change the church; I couldn't stay and go through meaningless rituals, knowing that the moral authority of the institutions were from men that allowed and participated in the sexual abuse of a child.

It seems to me that if we are all made in the likeness of God then things like our sexuality, hair color, height etc comes from God.

What I wish the catholic church would do is shut up about gay marriage, clean and address the problems in the church. There are many, pedophilia, lack of priests, people leaving the church and the lack of women represented in the hierarchy. Then they can address world poverty.

Why they elected this Nazi, I will never know!