"We Get Mail" -- A report from the All Saints Church Front 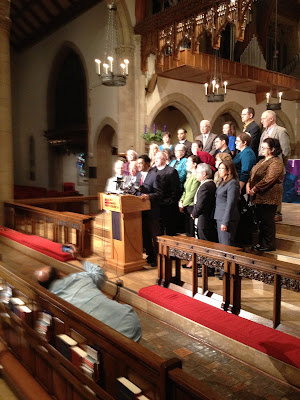 The fact that All Saints Church has been on the receiving end of hate mail in response to our hosting the 12th Annual National Convention of the Muslim Public Affairs Council (MPAC) has been ... to put it mildly ... in the news.

Although the event has been on the calendar for months -- and All Saints Church being actively involved in interfaith activities is hardly "news" -- last Friday, November 30 an article appeared on a conservative blogsite critiquing both All Saints and MPAC. Entitled "California Church to Become Site of Islamist Convention" the article was sponsored by the Institute for Religion and Democracy (IRD) and full of mischaracterizations about MPAC and an organization and our friends Dr. Maher Hathout and Salam Al-Marayati as individuals.

Immediately after the article was posted, we began receiving emails protesting All Saints' involvement in the MPAC Convention and containing -- as Ed Bacon aptly named it  -- "some of the most vile, mean-spirited email I’ve ever read in my life."

Because the polemic nature of the correspondence so perfectly made evident the need for exactly the witness MPAC and All Saints are making by having a Muslim convention at a Christian church, we made the considered decision to go public with the challenges we were receiving -- to turn toxic rhetoric into teachable moments.

Ed preached about it in his sermon on Sunday.
Susan blogged about it in the Huffington Post on Monday.
All Saints and MPAC sent out a joint press release about it on Tuesday.
KNBC ran a story about it on Wednesday.
And on Thursday, we held a joint press conference where dozens of faith leaders stood in solidarity while
All Saints and MPAC leaders spoke to a bank of cameras representing every local media outlet and a national live-streaming audience.

Video of the press conference will be available on the All Saints YouTube Channel, and a number of news outlets have already posted stories, including:

The Los Angeles Times
The Washington Post
The Associated Press

"So how bad were the emails, actually?" is a question we've gotten. Some of them were quite honestly so bad that they are not going to see the light of day. But in the interest of transparency, here are a few select quotes:


The subject lines in the emails ranged from: “Don’t be gullible suckers” to “Muslim Public Affairs Council Convention -- a grave mistake”

“Islam is satanic garbage, indistinguishable from Nazism. Do not welcome the muzziescum into your church. They're like Body Snatchers.”

“I am dismayed that you would allow your church facilities to be used for the annual convention of the Muslim Public Affairs Council. When Dr. Maher Hathout of MPAC spoke at your sister church, St. John’s Episcopal Cathedral in Los Angeles his address was filled with lies and misleading statements. Dr. Hathout cannot tell you the truth about Islam because you would be offended and revolted.”

“You are Consorting with the Enemy that is Killing Christians Worldwide”

"It is not my purpose to call you names. It IS my purpose to recognize you for true stereotypes of the "useful idiot," first recognized and exploited by Lenin. The problem is that by providing cover and legitimacy to an organization dedicated to overthrowing the Constitution you endanger my country and my grandsons' future. And for that I cannot forgive you."

"You are contributing to the demise of all of Western (Christian based)civilization. You are making a grievous error."

As noted -- these are the printable ones. For more information on the MPAC Convention visit their website. And do keep our human race in your prayers. Clearly it has a ways to go until it becomes a human family.
Posted by SUSAN RUSSELL at 5:01 PM

So unbelievable. "body snatcher" what are we back to, junior high?