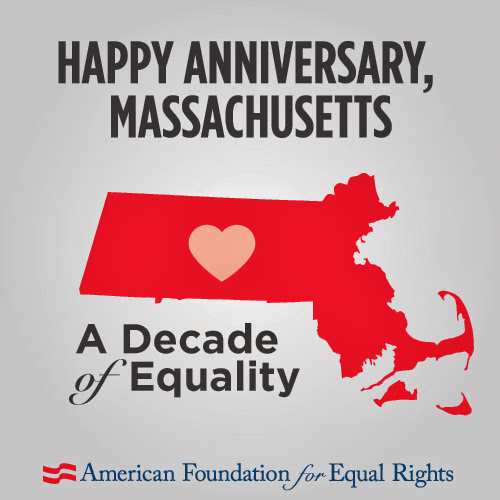 What a difference a decade makes!

Ten years ago today, a historic decision was issued which brought marriage equality to the first state in the nation. The Massachusetts Supreme Judicial Court ruled:


“The Massachusetts Constitution affirms the dignity and equality of all individuals. It forbids the creation of second-class citizens.”


“We declare that barring an individual from the protections, benefits, and obligations of civil marriage solely because that person would marry a person of the same sex violates the Massachusetts Constitution.”

The historic decision, authored by Chief Justice Margaret Marshall, was the final result of a case brought by seven gay and lesbian couples who lived in the state.

Read the rest here ... and give thanks to all those who paved the way and continue the struggle!
Posted by SUSAN RUSSELL at 3:01 PM