What Religious Liberty Is ... and Isn't! 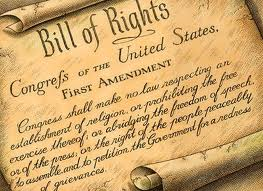 My latest contribution on the Huffington Post ... nothing I haven't said numerous times before but -- given the recent news of the week -- it seemed time to say it again:

Religious liberty has been trending on Twitter this week -- and not in a good way.

Whether it was in Illinois or Oahu, whether the debate was about achieving marriage equality or ending employment discrimination and whether the issue was LGBT equality or women's reproductive rights it seemed that someone, somewhere was giving impassioned testimony about how their religious liberty was under attack.

So here's a little reality check: Religious liberty is NOT the liberty to impose your religion on everybody else.

The First Amendment protects us from any laws "impeding the free exercise of religion" thus guaranteeing that each and every American has the liberty to believe -- or not believe -- absolutely anything he or she chooses about what God wills or intends, blesses or condemns.

It also -- thank God -- protects the rest of us from any other American imposing those beliefs on us.
For example: A Jew has the religious liberty to keep a kosher kitchen -- but not to take away your ham sandwich.

A pre-Vatican II Roman Catholic had the religious liberty to abstain from meat on Friday -- but not to confiscate my pot roast.

And an Evangelical Christian has the right to believe that God doesn't bless same-sex marriages - but not to deny equal protection to the marriage of the lesbian couple next door.

The Constitution already protects the right of any clergy person to make decisions about whether or not they preside at a marriage based on their own "free exercise of religion." No orthodox rabbi has ever been compelled to solemnize an interfaith marriage. No Roman Catholic priest has ever been forced to marry a previously divorced couple. And nobody - priest, pastor, rabbi, minister or Imam -- is ever going to be required to marry a same-sex couple.

The First Amendment is doing its job protecting our religious liberty. And anybody who tells you otherwise needs to do a little remedial reading of the Ninth Commandment. (I'll save you having to look it up: that's the "shall not bear false witness" one.)
Posted by SUSAN RUSSELL at 10:10 PM

Brush up on "public accommodation" and get back to me.

I understand what "public accomodation" is. But it does not change the fact that the religious liberty of those people is being violated - even if it is being done under color of law.

Religious liberty is the liberty to believe what you choose ... not to discrminate against those who believe differently than you do ... or don't believe at all.

And I believe that's all I've got to say about that.

what if some business decided not to wait on someone because of the color of their skin? You have to remember we are talking about business and government here not about church.

Any church in America is free to exclude whoever they wish be that, blacks, gays, or women.

The color of one's skin is something that one is born with and carries no moral weight.

Are we really going to play this one over again?

Sexual orientation is something one is born with and is morally neutral.