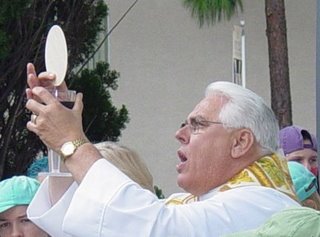 A nice profile of my bishop, Jon Bruno, in today's L.A. Times ... note that +Jon will be a keynote speaker at the Episcopal Majority gathering in Washington this week.


In troubled times, L.A.'s Episcopal leader seeks to be a unifying force.

On a recent Sunday morning, the Rt. Rev. Jon Bruno, bishop of the Los Angeles Diocese of the Episcopal Church, stood before a congregation in Ventura County with his hands clasped, the fingers tightly interlaced, as two boys summoned from the pews tried to pull them apart.

It was not an easy task. Bruno stands 6 feet 5 and weighs 285 pounds, and his hands are in proportion to the rest of him. They are hands, moreover, that have clasped dying young AIDS patients in compassionate embrace and held off charging defensive linemen on behalf of a championship college football team, hands that gripped the shotgun as a fatal blast was delivered in the service of law enforcement.

"Pull, come on," Bruno exhorted the boys, who tugged and yanked to no avail as the congregation laughed. "They could pull all day and all night, and they still won't pull them apart," Bruno declared. "We need to be in that kind of community. Even though we have disagreements, even though we're in pain and sorrow, we need to be together."

Read it all here ... and give thanks for bishops like our +Jon!

Posted by SUSAN RUSSELL at 6:18 AM

I thought this was an extraordinarily honest, accurate and balanced profile of the Jon Bruno I've known since he was the rector at St. Patrick's and I was the parish secretary at St. Paul's. The most compelling quote to me, however, wasn't from +Jon but from Bill Thompson ...

"The Rev. William Thompson, the breakaway rector of All Saints in Long Beach, views Bruno and his actions in a different light. "Jon Bruno is a very passionate guy," he said. "He needed, in his own sense of personal integrity, to do what he could to prevent something he thought was wrong."

In these polarizing times it is extraordinary to see anything other then polemic coming from the "other side of the aisle." It is a tribute to +Jon that even those who oppose his policies applaud his integrity.