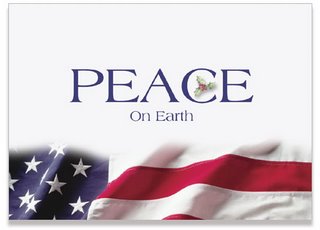 These numbers mean nothing by themselves. The numbing and stunning death of so many on that one day, and the death of the firefighters who tried to save them, stands as a single terrible event. The slow agonizing trickle of news of deaths in Iraq has taken years. Yet for everyone who knew of someone who died in New York that day, there are equally people who know of someone who has died in Iraq. The news is devastating either way.

The Administration argues that being at war in Iraq is somehow connected to the deaths of those in the Towers. If so then perhaps the occasion marking the time when we have put in harm’s way sufficient people to where their deaths equal the deaths in the Towers is an occasion for reflection.

Read Mark's reflections here -- and pray for the peace on earth the Prince of Peace came to create on earth as it is in heaven.
Posted by SUSAN RUSSELL at 8:29 AM