Enough to Make Your Eyes Sweat ... 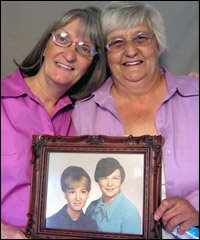 Don't miss this wonderful story of love, redemption and living happily ever after in spite of the odds from NPR's Morning Edition:

Sandi Cote-Whitacre and Bobbi Cote-Whitacre have been together for nearly 40 years.
The two met when they were very young. As Bobbi asked her partner recently, "Do you remember what it was like when we were 19 and totally in love -- and couldn't tell anyone?"

While the couple knew immediately that they would spend the rest of their lives together, the people around them weren't so accepting.

After moving to a small town in Ohio, their relationship was revealed. Bobbi's mother gave them three days to leave town, Sandi recalls, "so that we wouldn't disgrace your father, his practice, your extended family."

Despite that reaction, Sandi and Bobbi stayed together, and after 33 years they were joined in a Vermont Civil Union ceremony, finally announcing their commitment to each other out loud.
But there was one condition set for the occasion: Bobbi's mother insisted that she walk her daughter down the aisle. Her demand came despite a recent diagnosis of a brain hemorrhage.

"And this was the same woman," they said in unison, "that gave us three days to get out of town."

Four years after their Vermont ceremony, Bobbi, 58, and Sandi, 59, were officially married in Massachusetts. And having their friends and family there, Sandi says, "was sort of like being 19 again."

This story was produced for 'Morning Edition' by Katie Simon. You can listen to it here
Posted by SUSAN RUSSELL at 2:30 PM

I noticed in the obituaries that Dana Rose, a 52 year-old priest in the Diocese of Newark died in August. He was active in The Oasis, the AIDS Resource Center, and an AIDS bereavement program in NYC that he founded called CenterBridge. Can anyone here tell me/us whether his death was due to AIDS?

Words fail me in trying to understand why lies behind this question about the passing of brother priest on this post about two women celebrating decades of living happily ever after.

My initial instinct was to "moderate" it (AKA delete it) but decided to do some research instead.

A colleague pointed me to this post on the Stand Firm site:

"The Living Church reports in its obituaries (10/22/06, p. 28) that a 52-year-old priest died recently in the Diocese of Newark. There is no mention of his illness, but it does say that he was the education coordinator for The Oasis, a ministry of the diocese to gays. It also says that he was project director for the congregational training programs at the AIDS Resource Center and that he founded CenterBridge, an AIDS bereavement program in NYC. I know that we can’t assume that he died of AIDS, but I am guessing that it was his life-giving lifestyle that did him in. How sad."

And I was able to point the poster (The Reverend Tony Seel of St. Andrew's in Vestal NY) to the moving tribute to Dana Rose's life and ministry posted in August by the ever-eloquent Elizabeth Kaeton:

Words still fail me in trying to understand such spiteful pettyness but re-reading about all that Dana was and did and offered to this hurting world was in itself an answer of love and service outliving the slings and arrows of those who are determined to tear down rather than build up. And if it truly comes to a "Choose This Day" moment it is getting easier and easier with every day to choose the Gospel of love lived and served by priests like Dana and let those who choose otherwise to walk apart with their snide certitude.