And now the Gallup Poll folks weigh in ... 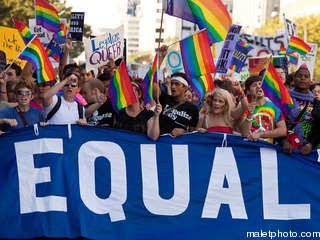 Lots of news stories out about it today ... here's the one from the L.A. Times ... which begins:

Thanks to a radical shift in thinking among independents and Democrats during the past year, for the first time in Gallup Poll tracking a clear majority of Americans now approves of gay marriage.

A new Gallup Poll released this morning finds that this month 53% of Americans say same-sex marriage should be recognized in law as equally valid with traditional male-female marriages.

The spurt in support of 9% in the past 12 months was the largest registered since Gallup first tracked the topic in 1996. Back then, only 27% supported same-sex marriage and two-thirds opposed.

If you're keeping track:

Last month, a CNN poll also found for the first time that a majority of Americans supported same sex marriage, in the poll by a 51% to 47% split. And while a Pew poll back in March found Americans evenly split in their views on same sex marriage, that result furthered a clear trend of rising support over the past several years.

The mounting pile of polls indicating growing support for same sex marriage couldn't come at a worse time for Republicans, as they've just suffered an embarrassing setback in their legal challenge to the White house over Attorney General Eric Holder's announcement that the Department of Justice would no longer defend DOMA.

Republicans were outraged by that decision, and responded by saying they would defend the law -- which bars the federal government from recognizing same sex couples -- in court. But mere days after Speaker of the House John Boehner (R-OH) announced that law firm King & Spalding had signed on to defend DOMA, the law firm backed out, prompting one of their attorneys, Paul Clement, to resign.

So Onward and Upward, folks. (And yes, this is all good info to be taking to Washington this week for HRC's Clergy Call Lobby Day!)
Posted by SUSAN RUSSELL at 10:45 AM

Fer shur -- and about damn time!