Prop 8: Boies and Olson Explain It All

Well, they don't exactly explain it ALL but they do a darned fine job of giving an accessible overview of where we "are" in the post-Prop 8 legal process and what we might reasonably expect to happen next. (Or at least what some of the likely options are.) 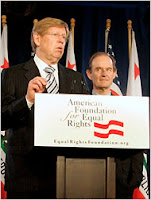 You'll want to read it all here ... but here are a few highlights:

There is, legal experts say, a distinct possibility the Court could determine that there is no one qualified to defend the state's interests in arguing that Prop 8 should not have been struck down. Both the governor and the attorney general have refused to do so. If that's the case, then Walker's overturn becomes de facto law. That would be a victory for gay rights advocates, but a narrow one. While it would likely allow for same-sex marriage in California, it would not address marriage in other states.

"The fundamental issue is that this is not something that ought to be decided politically," he said during the briefing. "It’s very encouraging to all of us that there is this shift in public opinion [in favor of same-sex marriage]. Even in the absence of opinion in public, the fact of the matter is the constitutional protections are clear."