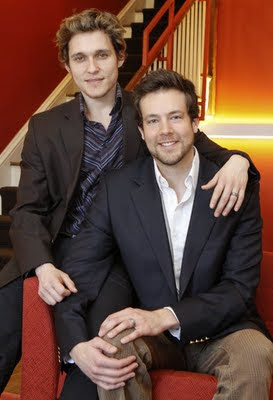 Remember Josh and Henry ... the same-sex couple facing deportation because the BIA (Bureau of Immigration) is bound by the so-called Defense of Marriage Act (more aptly called the "Discrimination Against Our Marriage Act") not to recognize their marriage for immigration purposes? [if you "missed a meeting" here's the link]

Valandia will have to appear in court again on Dec. 16, but in the interim can stay in their Princeton home.

Because of the federal Defense of Marriage Act, the federal government does not recognize same-sex marriages.

The state did not oppose the petition.

The couple reacted with relief after the decision, hugging family members and wiping away tears.

"It's the best outcome that we could have hoped for," said gay rights lawyer Lavi Soloway, who added that the law could change by December.

This is SUCH good news. Thanks for spreading the word.