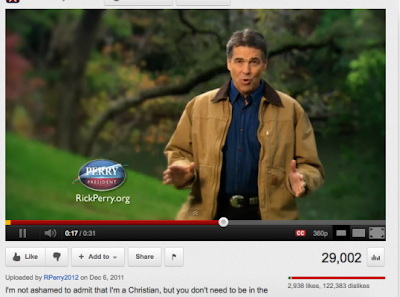 This is a piece I wrote for the Huffington Post in response to the despicable ad campaign launched by Rick Perry earlier this week. If you haven't seen it, here's the link ... and I was delighted to hear on the news this morning that the video is on track to be "the most 'disliked' video in the history of YouTube."(As I post this the tally is 10,587 likes, 434,564 dislikes)

It's beginning to look a lot like Christmas - but sadly Rick Perry is decking the halls with homophobia rather than holly. His new December ad campaign promising voters that as president he would "end Obama's war on religion" and "fight against liberal attacks on our religious heritage" begins:

I'm not ashamed to admit that I'm a Christian, but you don't need to be in the pew every Sunday to know there's something wrong in this country when gays can serve openly in the military but our kids can't openly celebrate Christmas or pray in school.

So here's the deal: I am likewise not ashamed to admit that I'm a Christian. In fact I'm proud of the foundational values of love, justice and compassion that ground me in my own tradition and connect me to others committed to the same traditional values held sacred by their own faiths and religions.

But I am ashamed when a presidential candidate uses gay and lesbian Americans as sacrificial lambs on the altar of partisan politics while they're on the battlefield putting their lives on the line to protect the constitutional rights Perry is unwilling to grant to their families.

Because you don't need to be a Christian - or a constitutional scholar -- to know that there's something wrong in this country when candidates for president can openly express their ignorance about the First Amendment but gay and lesbian families can't count on the equal protection the Constitution equally guarantees all Americans.

The First Amendment protects the rights of all Americans to believe whatever they choose about what God blesses or doesn't bless; sanctions or doesn't sanction; intends or does not intend. It does NOT protect anybody's right to impose those beliefs on other Americans - in fact, remaining neutral on matters religious is not a "war on religion" but a safety net for the religious liberty that is our American heritage. And nobody said it better than Ronald Reagan:

"We establish no religion in this country, we command no worship, we mandate no belief. Nor will we ever. Church and state are, and must remain, separate. All are free to believe or not believe, all are free to practice a faith or not, and those who believe are free and should be free, to speak of and act on their belief. At the same time as our constitution prohibits state religion, establishment of it protects the free exercise of all religions. And walking this fine line requires government to be strictly neutral."

It also requires leaders who actually understand the Constitution enough to defend it against all enemies, foreign and domestic. And sadly those seem to be in very short supply at the moment.

There is something wrong in this country - but what's wrong has nothing to do with gay and lesbian troops defending it on the battlefield or gay and lesbian parents raising their children to believe that liberty and justice for all really means "all." Rather, it has everything to do with presidential candidates using homophobia as a weapon of mass distraction calculated to mobilize their political base.

What's wrong with this country has nothing to do with those committed to building bridges between faith traditions and working to defend First Amendment rights of both freedom of and freedom from religion. Rather it has everything to do with narrow ideologues so busy putting Christ back in Christmas that they forget to live out Jesus' call to love their neighbors as themselves the other 364 days of the year.

It's beginning to look a lot like Christmas. I'm not ashamed to admit that I'm a Christian, but you don't need to be in the pew every Sunday to know there's something wrong in this country when the Christmas message of "Peace on Earth, Good Will to All" is hijacked by politicians decking the halls with homophobia instead of holly.

While I really appreciate this post and acknowledge that somebody had to say something - and, who better than YOU to do it? - I have to ask: Hasn't this guy gotten too much 'air time' already? The more he opens his mouth, the worse it gets.

Honest to Pete! We've sent several men to the moon. Can't we send this one, too? Somewhere? Anywhere but the White House.

I think Perry's ad (i.e., the response to it) represents a "Homophobia has Jumped-the-Shark" moment, EVEN among conservative Republicans!

A friend and fellow musician posted this on facebook about Mr. Perry.

"I can't help but wonder how Aaron Copland, whose iconic music came to be representative of our country in so many ways, would feel about this hackneyed derivative parody of his innovation used to support such hate. As a son of Russian immigrants, as an American icon, as a gay man, I think he would find this the most anti-American thing ever. Hey Rick Perry, I'm not ashamed to admit you're the least Christian person I've ever seen."

You gotta see this rebuttal: http://www.funnyordie.com/videos/e23d1c26d4/jesus-responds-to-rick-perry-s-strong-ad

Did you see Rabbi Jason's re-make of the video?

It's a whole new cottage industry!

Rick Perry refused to say Christmas in his "holiday" message several times, including a press release just last year and this video message in 2008: