Advent, MPAC and the Armor of Light 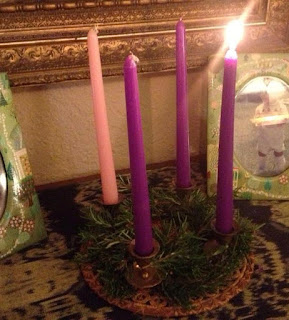 ad·vent/ˈadˌvent/Noun:
1.The arrival of a notable person, thing, or event.
2.The first season of the church year, leading up to Christmas and including the four preceding Sundays.

The second part of the definition above was the first reason we lit the Candle of Hope: the first season of the church year leading up to Christmas. And it occurred to me today that the first part of the definition was a second reason: the arrival of a notable event. And that notable event is one filled with Hope -- the 12th Annual Muslim Public Affairs Council convention being held at All Saints church on December 15.

It is a first ever. From the MPAC Convention website:


All Saints Church is a symbol of ideal religious coexistence and pluralism in America. This year’s convention promises to bring our communities together to discuss the important issues we face today involving religious pluralism, violence and bigotry. The future of our country is dependent on work with both the interfaith and civic leaders, now more than ever.

A national Muslim Convention in a Christian Church. Now that's hope we can not just believe in but touch. Feel. Participate in.

Hope that there actually are people of faith refusing to be polarized over differences and instead choosing to mobilize over shared values of love, justice and compassion.

Hope that the armor of light we put on during Advent is a light to ALL people.

And hope that in our coming together to shine that light we can particpate in bending that arc of the moral universe a little closer to justice by our shared witness to the God who created us all in love and called us to walk in love with each other.

Not everyone is as excited about this as I am.

A Google Alert hit my inbox on Friday morning with a link to something called "Right Side News." The headline was "California Church to Become Site of Islamist Convention" and it turned out the piece was "sponsored by the Institute for Religion and Democracy."

Yep. IRD. Our old friends who have been working oh-so-diligently to "return mainline churches to biblical orthodoxy" are back. Only now they're not after "the gays" ... they pretty much lost that one. Now they're after the Muslims with this opening shot: "Yet again, the Islamists are taking advantage of naïve Christians with a desire to show off their tolerance."

Seriously. I've been at All Saints Church for over a decade and we've been called MANY things -- but naive just doesn't come up. If you want some background on the IRD here's a start ... a blog I wrote back in 2009 (when Kendall Harmon would still let me comment on Titusonine) and also here's some brief context from a piece by Daniel Webster in The Witness back in 2006. It was entitled "This Schism Brought to You by the IRD."


There's no better description of how the IRD works than Hard Ball on Holy Ground, The Religious Right v. the Mainline for the Church's Soul (Boston Wesleyan Press, 2005). This book, edited by Stephen Swecker, is a compilation of articles by several authors who expose the IRD for what it is. "In the end, the IRD is not a program grounded in faith but, rather, in fear -- both fear of change in general and fear of loss by those who benefit most from the status quo, i.e., the wealthy and the powerful," writes Swecker in his closing article.

Yes, we know these folks. And now -- having failed to recreate our churches in their own image -- having failed to keep women in their place and LGBT people as strangers at the gate -- they're turning their attention to our Muslim brothers and sisters. They are at this point nothing less than an organization looking for an "other" to scapegoat and persecute. And that's why we at All Saints Church are getting out our armor of light. Because we're going to need it.

The emails we've started getitng in response to the article are, as Ed Bacon said in his sermon on Sunday:


"... some of the most vile, mean-spirited email I’ve ever read in my life, talking about All Saints participating in terrorism by being hospitable to Muslims. To be a member of All Saints Church is to be a member of the peacemaking community in the world, and to that end, I also believe that to be religious in the 21st Century is to be interreligious. MPAC is one of our integral partners in interfaith peacemaking."

So stay tuned. Keep awake. Put on your armor of light -- and join us, won't you?

Join us in lighting a Candle of Hope that people of faith not only can but will stand together against polemic and polarization by focusing on instead on the mobilization of God's values of love, justice and compassion. Join us in speaking out against Islamophobia with all its hatred and ugliness. And join us in trusting together we truly can turn the human race into the human family.
Posted by SUSAN RUSSELL at 10:14 PM

Every time I put on the Armor of Light, Iron Man comes and beats me up. No way, man. No way.