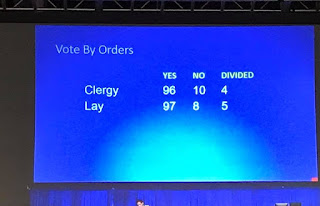 The work of continuing to make the full and equal claim promised LGBTQ Episcopalians in 1976 not just a resolution but a reality continued on legislative day five of the 79th General Convention of the Episcopal Church. By an overwhelming majority, the House of Deputies adopted an amended version of Resolution B012 entitled "Marriage Rites for the Whole Church." The resolution will now go to the House of Bishops for action.

Questions are still swirling about the intent and impact of this important resolution. Here is what I said when I spoke to it on the floor:


I rise in favor of B012 — a resolution that will move us beyond the seemingly intractable challenge of living together as a church where the sacramental marriage that has been authorized for all couples in the Episcopal Church is irreconcilable with the theological conscience of some members of the Episcopal Church.

The question for this General Convention is whether the gift of walking together forward into God's future as members of the Episcopal branch of the Jesus Movement is worth the painful compromises we are mutually being asked to bear in order to make that possible.

I believe the answer is yes and I urge support for Resolution B012 as Proposed by Committee 13 so that we may continue to walk forward together.

One of the primary questions I'm getting is a form of "What about DEPO?"

Here's what I've got ... a bit on the fly between legislative sessions:

DEPO -- Delegated Episcopal Pastoral Oversight -- was part of the original version of B012 and was changed via amendment by Legislative Committee 13. As a member of that committee, I can attest that the changes we made were in response to hours of testimony from both proponents of same-sex marriage from the eight dioceses where marriage for all is not yet a reality and from seven of the eight bishops with jurisdiction in those dioceses.

What we heard was that the relationships between the bishop and dissenting parishes are not irreparably damaged -- simply challenged on this issue of sacramental marriage. In response, this carefully crafted compromise language -- crafted in consultation with bishops from across the theological perspective -- recognizes that reality and seeks to provide an option that protects both theological conscience and sacramental access for all.

For more clarity, I turn to these wise words from Deputy Christopher Hayes:


B012, if adopted by the House of Bishops in the same form, gives the Rector or Priest-in-Charge of the congregation full authority to use the marriage liturgies for same-sex couples. If the officiating priest or the couple for some reason need pastoral support of a bishop, and the diocesan bishop has theological objections, another bishop should be invited to provide that pastoral support.

This is not DEPO, which presumes a broken relationship between the bishop and the congregation, so that another bishop must take over the pastoral relationship and ecclesiastical authority over that congregation for all purposes. B012 does not provide for that. It provides only for another bishop to be invited in if, and only if (1) the officiating priest needs pastoral support for the particular marriage (rarely), or (2) permission is needed for marriage after prior divorce.

Some other important points to note: 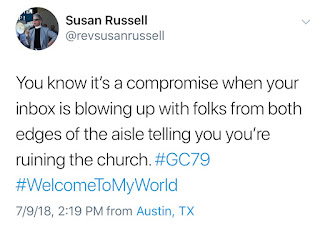 As Rachel would say: Watch this space.
Posted by SUSAN RUSSELL at 1:52 PM