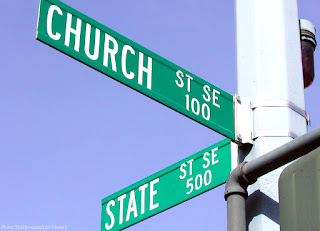 Religious liberty is once again trending on Twitter this morning — and not in a good way.

Whether the debate is about achieving marriage equality or ending employment discrimination and whether the issue is LGBTQ equality or women’s reproductive rights it seems that someone, somewhere is convinced that their religious liberty is under attack because not everyone agrees with them. This is not a new phenomenon ... it's been going on since Pat Robertson launched the Culture Wars with the speech that drove me out of the Republican Party in 1992. But I digress.

The reason religious liberty is trending on Twitter this morning -- and not in a good way -- is that Attorney General Jeff Sessions announced a new "religious liberty task force" which is nothing less than a wolf-in-sheep's clothing effort to attack the equal protection guaranteed all Americans by privileging the religion practiced by some Americans.

So here’s a little reality check: Religious liberty is NOT the liberty to impose your religion on everybody else.

It also — thank God — protects the rest of us from any other American imposing those beliefs on us.
For example: A Jew has the religious liberty to keep a kosher kitchen — but not to take away your ham sandwich.

A pre-Vatican II Roman Catholic had the religious liberty to abstain from meat on Friday — but not to confiscate my pot roast.

And an Evangelical Christian has the right to believe that God doesn’t bless same-sex marriages - but not to deny equal protection to the marriage of the lesbian couple next door.

The Constitution already protects the right of any clergy person to make decisions about whether or not they preside at a marriage based on their own “free exercise of religion.” No orthodox rabbi has ever been compelled to solemnize an interfaith marriage. No Roman Catholic priest has ever been forced to marry a previously divorced couple. And nobody - priest, pastor, rabbi, minister or Imam — is ever going to be required to marry a same-sex couple.

The First Amendment is doing its job protecting our religious liberty. And anybody who tells you otherwise needs to do a little remedial reading of the Ninth Commandment. (I’ll save you having to look it up: that’s the “shall not bear false witness” one.)
Posted by SUSAN RUSSELL at 8:59 AM