We're Anglicans. We've Got This. 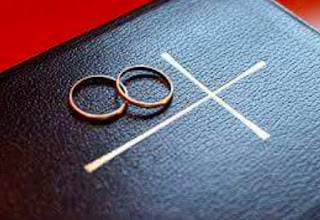 It has been over 40 years since the Episcopal Church declared that “homosexual persons are children of God who have a full and equal claim with all other persons upon the love, acceptance, and pastoral concern and care of the Church.” [1976-A069]

Since that time the church has been moving forward — sometimes an inch at a time — to turn that resolution into a reality. Just as with the ordination of women in the 1970’s not everyone has agreed … but part of our charism as Anglicans has been to claim our big tent heritage by making room for minority theological opinions. And the resolution (A085) coming forward to the 79th General Convention in Austin from the Task Force on the Study of Marriage maintains that trajectory.

And yet, as we gather in Austin there is an effort afoot to push back on that profoundly Anglican, both/and proposal. Seductively entitled "Marriage Rites for the Whole Church" an alternative resolution (B012) is described as seeking to "find a lasting way forward for all Episcopalians in one Church."

What it actually does is enshrine a separate and ergo inherently unequal status to the sacrament of marriage for same-sex couples. And it does that by privileging the theological consciences of some Episcopalians over the baptismal covenant of others. B012 is hardly a “compromise” when it proposes that dissenting bishops will agree to provide access for all couples (as they were charged to do in 2015 by A054) in return for consigning marriage for same-sex couples to perpetual second-class trial use.

The question on the table in Austin in 2018 is not whether there is a place for traditionalists with a minority opinion on marriage equality in the Episcopal Church. It is whether those holding that minority theological perspective should have the power to deny access to the sacrament of marriage to couples seeking God's blessing on their marriage.
And it is a patently false dichotomy to suggest otherwise.  The inability to exercise a right created by General Convention results in discrimination. The inability to impose one's theology on everyone else in the diocese is not discrimination, it is simply a  denial of unearned privilege.

Conservatives are free to believe whatever they wish and -- under the current canon law --free to decline to engage in rites they see as untenable. But they are not free to impose their vision on everyone else.  As Juan Oliver put it so concisely: The conscience of individual bishop does not go beyond the individual. It may not be used to refuse their diocese what the assembled Church has decided. There is in fact an ontological difference between feeling excluded because you're disagreed with and being excluded because of who you are.

Theology — by definition “the study of God” — is at its core the yearning of finite creatures to understand the infinite creator of all being … something arguably ontologically beyond our capacity to understand to begin with. And yet we try. We study. We conjecture and we come up with our best guesses. Where we go astray is when we start investing our best guesses with the authority of the God we’re best guessing about. And in the process we can end up with a kind of “theological fragility” which — like its second cousin white fragility — sees diversity as threat rather than blessing and in so doing rejects the very comprehensiveness that is a hallmark of Anglicanism.

The late, great Urban T. Holmes wrote in "What Is Anglicanism: " We often speak of Anglican "comprehensiveness." If this is a way of making relativism palatable or a means of accommodating all shades of opinion with no regard for truth, then it needs to be rejected. If by comprehensive we mean the priority of a dialectic quest over precision and immediate closure then we are speaking of the Anglican consciousness at its best.
As Anglicans we were formed in the crucible of the 16th century Reformation into a particular body ecclesial uniquely capable of being both protestant and catholic in a time when folks were being burned at the stake over disagreements about doctrines and dogmas. We are, therefore, uniquely wired to be a church that can hold together the tension of being both gay and straight ... and everywhere in between ... in the 21st century. We can do that because theological diversity is part of our DNA ... theological fragility is not.

We're Anglicans. We've got this.

Posted by SUSAN RUSSELL at 9:10 PM