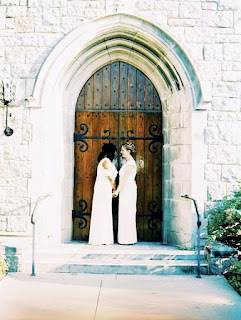 Making all sacraments available to all people was a key goal at this 79th General Convention -- and with the action today by the House of Deputies on Resolution B012 that goal was achieved. It was, however, a hard won compromise.


Because it fell short of changing the language regarding marriage in the current prayer book there are for those who believe our actions continue to fall short of the full and equal claim for the LGBTQ baptized promised in 1976. And because it removes the ability for dissenting bishops to prohibit same sex couples from access to the liturgies in their home churches, there are those who see our actions as a bridge too far away from their belief that marriage is only between a man and a woman.

And yet, it was a compromise that received overwhelming support from both the House of Deputies and the House of Bishops: something those of us who have been at this work for quite literally decades could not have imagined even a few short years ago.

We have done that over many years, with many steps forward and some steps back and -- in the action today -- we have done it in a resolution that protects both theological conscience and sacramental access for all.

In his opening remarks to this 79th General Convention, our Presiding Bishop Michael Curry challenged us to stay as focused on Jesus as Starbucks is on coffee.  Adopting  B012 will better equip us to do precisely that. It will enable us to move forward from Austin more fully the church we are striving to be. It will help us become a church where love truly is the way: a church where whoever you are and wherever you find yourself on the journey of faith there is a place for you.

Whether you're a double espresso or a mocha frappuccino ... or a grande drip with room for cream -- as Bishop Curry keeps reminding us:  there's plenty good room in God's Kingdom and in the Episcopal Church.

The hard won compromise achieved today finally making all sacraments available to all people in the Episcopal Church is work well done.  I am both deeply proud to be an Episcopalian and deeply grateful to all those on whose shoulders we stand as we start this new chapter -- moving out of the trenches of the Inclusion Wars and forward together into God's future as part of the Episcopal branch of the Jesus Movement.

Posted by SUSAN RUSSELL at 7:27 AM