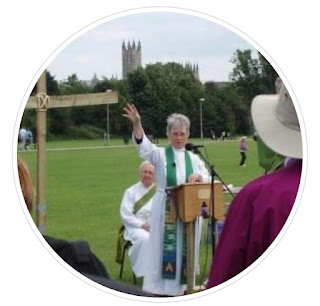 In 2008 I had the privilege of preaching at the Eucharist held on the fringe of the Lambeth Conference of Anglican Bishops. It was sponsored by the Inclusive Communion cohort who had come to witness to God's inclusive love in the face of the toxic systemic homophobia which infects the Anglican Communion in general and the Church of England in particular.

Thinking about what to say on the Eve of Lambeth 2022 I can't come up with better words than these ... so here they are again:

"Mind the gap" is something we've heard a lot since we've been here in England … and I can’t help but wonder if minding the gap isn’t one of the ways an island people cope with the challenges of gaps that don’t have anything to do with trains or platforms.

It is a mindset that says “gaps happen and we mind them and keep moving along” that is part of the DNA of not only the English people but of the English Church.

It is the essence of an Anglican comprehensiveness that has – up until now – been able to hold together a world-wide communion in spite of the gaps between theologies and polities and languages and liturgies.As this Lambeth Conference begins, I’m wondering if “minding the gap” might not be one of the most important things those of us who love, care about and pray for this Anglican Communion can do.In John 8:32, Jesus promised that “the truth will set you free.” To mind the gap is to commit ourselves to tell the truth about the very real gaps that exist between the experiences, worldviews, and theologies of many members of the Anglican Communion. It is equally to speak the truth that the Gospel we share is stronger than the differences we acknowledge.

And to claim the truth that the church -- at its best -- has not only the potential but the vocation to bridge not only the gaps that separate us from each other within the communion but the gaps that separate the church from the world it has been created to serve as the Body of Christ … as Jesus’ hands and feet at work in the world.
When Jesus said “inasmuch as you did it unto the least of these” the question he asked was “did you bring water to the thirsty, food to the hungry, clothing to the naked?” … not “did you agree on liturgical practice, come to consensus on a biblical hermeneutic, unravel the mystery of human sexuality?”And it is the opportunity to witness to that truth that will set this church – this communion – indeed this creation – free of the fear of inclusion and open to the Holy Spirit of God calling it to move forward in faith into God’s future.As our bishops gather for this Lambeth Conference, our prayer for them is that the God who has given them the will to do these things give them the grace and power to accomplish them. And our prayer for all of us is that we may go and do likewise. Amen
Posted by SUSAN RUSSELL at 12:24 PM