Reflection on General Convention in General and #GC80 in Specific 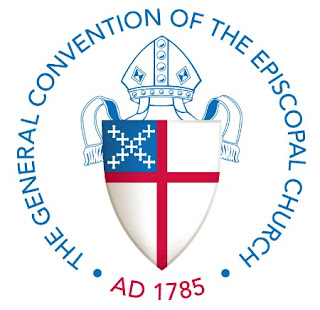 In 1991 my best friend and I left our grade school age kids with their other parental units and took a four-day road trip bound for the 70th General Convention of the Episcopal Church held in Phoenix -- in July.

There I discovered -- emerging from the dry heat of the Phoenix desert much like Brigadoon emerged from the Scottish mists -- a village of Episcopalians gathered for 10 days of liturgy, legislation and shopping all under one roof. And I was all in.

We got to hear Sandra Day O'Connor speak at a luncheon (ECW or EWC ... I forget now which.) We got to sit at Eucharist tables with Episcopalians from all over the church who amazingly seemed to both know and enjoy each other! We also got cleared out of the gallery in the House of Bishops when the debate over that-which-could-not-be-named (homosexuality) got so heated Bishop Browning sent us all out so they could duke it out in private.

Over the last thirty-one years I've had the extraordinary privilege of being part of every General Convention since.

I was a legislative aide to the Bishop's Committee on the Constitution in Philadelphia in 1994 where Bishop Bill Wantland of blessed memory told me I was "ontologically incapable of being an efficacious bearer of a sacerdotal presence" so I could never be a priest -- but he thanked me for my ministry. All of that made possible by the wonderful Jenny Ladefoged who shared her hotel room with me because I couldn't have afforded to go otherwise.

In Indianapolis in 1997 I was part of the press team -- representing our own Diocese of Los Angeles Episcopal News. By 2000 I had joined the Integrity USA team (led by the brilliant Michael Hopkins) and in Denver was part of the Communications squad and in 2003 in Minneapolis (in the vortex of the consent process for Bishop Gene Robinson) served as the Communication Director for Integrity, the convener of Claiming the Blessing and a member of the ECW National Board. (See also "eclectic career.")

As Integrity President in 2006 in Columbus and again in 2009 in Anaheim I had the crazy privilege of working with the inimitable John Clinton Bradley to field arguably the best teams of volunteers in the history of church, as we continued the work of moving the church forward on the full inclusion of all the baptized in all the sacraments against a ton of odds -- including a full-court-press from the Lambeth Conference of Bishops and the Archbishop of Canterbury.

We were back in Indianapolis in 2012 -- and for the first time I ran for and was elected as a deputy from the Diocese of Los Angeles: something that would have been unimaginable back in 1991 when we couldn't even talk about homosexuality -- much less elect out-lesbian Deputies! I served as First Alternate in 2015 in Salt Lake City -- where we celebrated both rites and rights for marriage equality -- and again as a Deputy in 2018 in Austin where we worked very hard on Committee 13 to finish the work of making marriage available to all.

And here we are in 2022 on the eve of the 80th General Convention. The "Nevertheless, They Persisted" Convention which has been both postponed and abbreviated by COVID will be gaveled into being in Baltimore on Friday, July 8 -- and those assembled will attempt the herculean task of sorting through 400+ pieces of legislation in four days.

May God bless them all in their work and keep them safe in their social distanced, masked, COVID protocoled assembly.

As a non-essential Alternate Deputy this year, I have not made the cross-country trek, but will be watching online with thousands of others as the business of the church continues as it has since the First General Convention convened in Philadelphia in 1785.

Over the last year I've had the privilege of being part of the launch of a new LBGTQ+ Caucus which is taking up the mantle of legislative leadership and continuing the now decades-old work of making full inclusion not just a resolution we adopt but a reality we live in the Episcopal Church -- thanks in large part to the support and leadership of our current PHoD Gay Clark Jennings who midwifed the Caucus into being.

And while of course I'm sorry and a bit sad not to be there in person, it is a gift to be able to participate remotely through the Media Hub set up by the the General Convention Office -- and through creative communication platforms like WhatsApp & TikTok.

It's crazy how fast these 31 years have gone -- and how quickly one goes from Ingenue to Elder. But it is also gratifying to look back at the work accomplished over those decades even as we board up to continue the work ahead of us -- continuing to call the Episcopal Church into its full stature as a beacon of God's love, justice and compassion in our beautiful and broken world in desperate need of all of the above.

Almighty and everliving God, source of all wisdom and understanding, be present with those who take counsel in the General Convention of the Episcopal Church for the renewal and mission of your Church. Teach us in all things to seek first your honor and glory. Guide us to perceive what is right, and grant us both the courage to pursue it and the grace to accomplish it; through Jesus Christ our Lord. Amen.