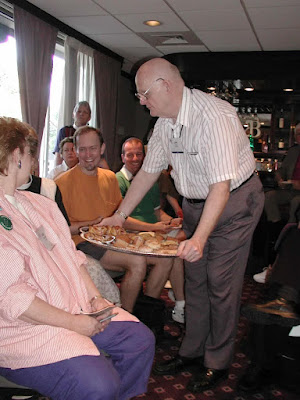 What a difference a couple of decades make.

This archival photo from the 76th General Convention in Denver in 2000 is from an initial meeting of an embryonic LGBT Caucus. We had gathered and begun to organize at a time when the risks were great and the rewards were ... to put it mildly ... nebulous.

Nevertheless we persisted -- and with Louie Crew's "Joy Anyway" wind beneath our wings we kept on coming back ... again and again like the Persistent Widow in Luke's Gospel.
Today -- Day Two of the 80th General Convention of the Episcopal Church -- we heard arguments for and against adopting a resolution which would establish a staff position of Director of LBGTQI and Women’s Ministries reporting to the Canon to the Presiding Bishop for Ministry: a position that has received funding from Program, Budget & Finance because it was determined to be such a vitally important addition.
It was a debate many of us who have been at this work for decades could not have even imagined being possible not all that long ago. But even more striking than the fact that the debate was happening was what was being debated.

The arguments were not about the place of LGBTQ people in the church or even about Leviticus. They were not about whether the work was important, necessary, and even vital.

Instead the arguments were about which legislative committee had the authority to make it happen when.
One committee considered the matter and recommended deferring it to 2024 for further study and refinement. The other committee took the language from the deferred resolution and created a substitute recommending adoption and securing funding.

This was not a question of one committee not "trusting" the work of another. Rather it was the result of having a different opinion of how the work should be accomplished and coming up with a proposal to bring to the Convention for consideration.

Nobody said it was perfect. In fact, with compelling testimony on the floor, Deputy Cynthia Black offered this perspective: 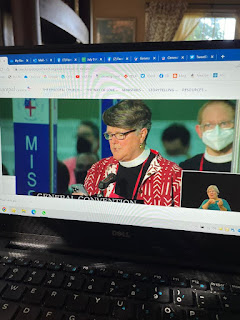 "Friends, I am a perfectionist. I can tell you story after story of times when I worked and worked and worked on something to get it perfect! And you know what? It was NEVER perfect. And in too many cases, the moment had passed me by. I have served on Committee 13– yes, the committee on Committees. We had to make hard decisions about whether a committee or task force could get its work done in two years and possibly risk not getting continued at the next GC. I look at this through a similar lens.

Here’s the deal with this resolution. It may not be the ultimate in perfection. But the time is NOW. It has been now for a long time, but it is especially time NOW as women’s and LGBTQ rights are at risk. Waiting two years to perfect this resolution would both likely kill it and more importantly miss an opportunity to to do the work that the gospel calls us to do. The time is also now because the hard work has been done to fund this resolution.

It’s never the wrong time to do the right thing and we cannot let the perfect be the enemy of the good. I urge adoption."

And Resolution A063 was adopted by a 57-43 percent margin in the House of Deputies. Joy Anyway!

Now it goes to the House of Bishop for concurrence ... which we hope will happen speedily and without arguments about which committee got to decide how to get this important work done.

Because -- as the House of Deputies affirmed today -- the time to get it done is now.