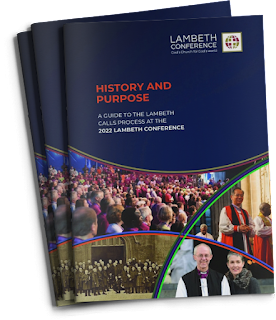 Your Grace,
As a veteran Lambeth watcher, I have been watching the plans for the upcoming Lambeth Conference 2022 unfold. It has been gratifying to see how much has changed since the days of the Anglican Inclusion Wars when we were literally consumed by the efforts to punish those who affirm the full inclusion of LGBTQ people in the Body of Christ by voting them off the Anglican Island. As Los Angeles Bishop John Taylor wrote:

In the year-long run-up to this summer’s gathering, planners have been cooing in our ears about fellowship and diligent study of 1 Peter, which Archbishop of Canterbury Justin Welby selected as our text. It would be, we were told, a time of gracious reconciliation and relationship-building.

All of which makes the sleight-of-hand move of inserting the Lambeth 1998 Resolution 1.10 anti-marriage equity language into the Lambeth Calls documents the gathered bishops will be called to affirm all the more egregious.

What can possibly be gained by reopening that battle which had — for the most part — been quelled in true Anglican fashion with an unarguable majority of provinces agreeing with Lambeth 1.10 and a significant minority disagreeing … and all coming to the table anyway?

To force a recapitulation of the portion of Lambeth 1.10 declaring "same gender marriage is not permissible" as "the mind of the Anglican Communion as a whole" pours kerosene on the embers of polarization and division -- turning the clock back rather than leading us forward into God's future.

It does nothing to serve the higher goals of unity around the common message of the Gospel and everything to once again cast LGBTQ people in the role of bargaining chips in a game of global Anglican politics.

The Gospel and the Communion deserve better. And so do God's beloved LBTQ people.

23. Prejudice on the basis of gender or sexuality threatens human dignity. Given Anglican polity, and especially the autonomy of Provinces, there is disagreement and a plurality of views on the relationship between human dignity and human sexuality. Yet, we experience the safeguarding of dignity in deepening dialogue. It is the mind of the Anglican Communion as a whole that same gender marriage is not permissible. Lambeth Resolution I.10 (1998) states that the “legitimizing or blessing of same sex unions” cannot be advised. It is the mind of the Communion to uphold “faithfulness in marriage between a man and a woman in lifelong union” (I.10, 1998).xxviii It is also the mind of the Communion that “all baptized, believing and faithful persons, regardless of sexual orientation are full members of the Body of Christ” and to be welcomed, cared for, and treated with respect (I.10, 1998).

You're welcome.
Best and warm,
The Reverend Canon Susan Russell
Canon for Engagement Across Difference
Episcopal Diocese of Los Angeles

*Credit for "bait-and-switch Lambeth" goes to Bishop John H. Taylor in this FB post
Posted by SUSAN RUSSELL at 1:31 PM