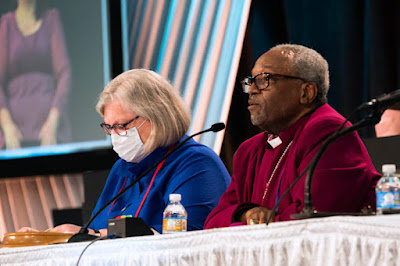 As the dust continues to settle from the 80th General Convention of the Episcopal Church, my FB feed is full of posts of friends and colleagues making their way home from Baltimore ... and reviews and summaries of the actions of GC80 are starting to pop up. This great ENS one from the always brilliant Mary Frances Schjonberg gives a very concise and helpful overview of major actions and challenges of what was truly an historic gathering.

This was the 11th Convention I've had the privilege of being part of -- this time from my "non-essential alternate" seat on my couch with my laptop. And so I also want to note -- with some bemused astonishment -- that among the resolutions that did not make the "above the line" commentary in the ENS overview because they were adopted overwhelmingly and engendered little if any debate or discussion were the ones posted below.

I need to sit with that realization for just a minute.

I need to work for a minute
to really absorb the fact that we have evolved
from a church which was on the verge
of being voted off the Anglican Island
for daring to aspire to be a church
where all the baptized were included in all the sacraments
and where you could expect at every triennial meeting
of the General Convention
to get beat up with toxic theology
and bad readings of Leviticus
into a church where a staff position for LGBTQI & Women's Ministries,
the creation of an LGBTQ+ Inclusion Task Force,
expansion of our definition of gender identity and expression,
and advocating for access to gender affirming care
are among the resolutions adopted by wide consent.
As in with no debate.

More later. But for the moment lots of gratitude -- and lots of resolve to keep the work moving forward. La lucha continua.
Posted by SUSAN RUSSELL at 1:47 PM