Back home again after a happily uneventful plane trip from JFK to 96 degree weather here in Pasadena. Before I dash off to do Evensong at 5:00 here are the notes I put together on the plane coming home on the Anglican Covenant Confeence presentations by Ian Douglas and Gregory Cameron. More thoughts to come ...

Ian Douglas on Lambeth Conference 2008 and the Anglican Covenant: Juridical or Missiological Imperatives? 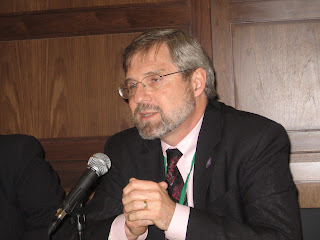 The theme of Lambeth Conference 2008 is “equipping bishops for ministry” and Douglas began by offering a corrective to what he named “the erroneous perception of a juridical imperative” for the Lambeth Conference 2008 – describing instead the “deeply intentional effort on the part of the design team to ‘do a new thing’” by creating what Douglas described as “a conference designed around opportunities to hear God’s voice in the ‘circle of accountability” of study groups.

Douglas made clear that the schedule for the Lambeth Conference, in fact, “has no large plenary session” where it would be even possible for “resolutions to be presented and voted up or down.”

In a nutshell, Douglas drew a picture of a 2008 Lambeth Conference dramatically different from its 1998 counterpart: a community of bishops gathered to converse rather than a conclave of bishops convened to resolve.

During the Q&A following Dr. Douglas’ presentation, Ian was queried about whether the design team had “designed any contingencies” for the potential of having their best laid plans hijacked (I think that’s the word I used) by those who might be coming to Lambeth with juridical intentions in spite of the design team’s missiological intentions.

His response was that no one was more committed to keeping the design of the conference as described than the Design Team … and that the Archbishop of Canterbury had appointed the Design Team to act as the Management Team on the ground in Canterbury.

I am choosing to be encouraged. And we shall see. 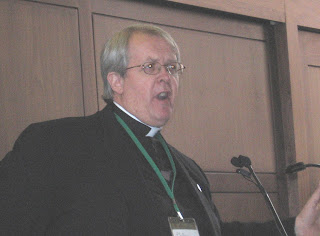 At the beginning of his presentation, Cameron noted with some irony that the Anglican Communion Office’s efforts to “be faithful to the unique vantage point from which it sees the Communion in operation” has resulted in it being simultaneously described as a branch office of 815 and a bastion of reactionary conservatism.

Starting from a point of belief that that “recognition of ‘the same DNA’ makes more possible cooperation between constituent members of the Communion” Cameron asserted “a covenant does not solve all the problems but offers a potent ideal in holding the church in mutual relationship.”

He expressed “huge reservations about the appendix [of the St. Andrew’s Covenant draft] as it currently exists as it falls into a juridical model.” He also noted that “Jenny’s analysis needs to be taken seriously” and warned of the danger of “creeping authoritarianism.”

Regarding the so called “Instruments of Unity,” Cameron reminded that “they cannot command or require; they can only advise and recommend” going on to say “they can only ever be a council of advice and unless we get that particular point exactly right we are in for all sorts of problems.”

Cameron offered a helpful reminder that the primates are, in fact, “no more and no less than the senior pastors of their own provincial jurisdictions” maintaining that “they cannot speak with any more authority than that.”

In a nutshell, he expressed his hopes for a covenant that would be “both relational and aspirational,” helping us describe “what exactly is characteristic of Anglicanism” and enabling us to “recognize, acknowledge and strengthen those foundations on which communion are built in the first place.” His hope was for a covenant that would offer a “blue print for mutual mission” that “outlines the common boundary stones” and enables us “as Anglicans to be clear with each other about what our expectations actually are” for our “mutual, open-ended, ongoing relationship.”

God bless Gregory Cameron! He has got it exactly right. Let the Primates Meeting pay heed!

My problem with both drafts of the proposed Anglican Covenant lie precisely in the juridical dimensions. This movement on the part of American dissidents and their GS allies is precisely to transform te Communion into something it never was and never should be. I pray that they will not succeed.

You know, I found it curious that there has been 'Radio Silence" from the Right about this conference.

There are none so deaf as those who refuse to hear.

The Anglican Communion has survived for over 400 years without any covenant whatsoever. We are bound together by God's love and the Holy Spirit in a common faith in Jesus. We simply don't need it. The Church has survived without a Covenant, and will continue to survice without one.

One wonders how we ever got along without you! It is simply worth-beyond-measure to have both your information and your commentary.

Hey, God: just a couple of minutes of gratitude for Susan, ok?

DavidJustinLynch,
Although I agree with the sentiment, please study the history of our churches a little more closely. The second church in the Anglican Communion, although unofficially, was TEC, when it formally separated from the Church of England in 1789, only 219 years ago.