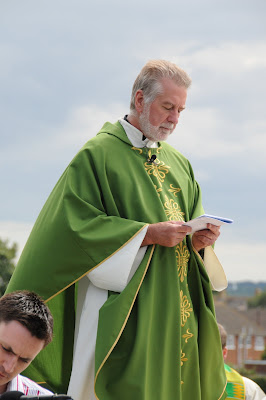 [TimesOnline.London] A close friend of the Archbishop of Canterbury who was tutored by him at theological college said he felt betrayed by Dr Rowan Williams’ new-found opposition to gays and lesbians in the ordained ministry of the Anglican Communion.

The Rev Colin Coward, 64, who lives with a gay man and who preaches regularly at his local church in the Salisbury diocese, said that Dr Williams was aware of his sexuality and never once challenged it.

He said that about a quarter of the 50-plus students at his Cambridge theological college were gay and this was accepted by the Church of that era. Dr Williams was a tutor at Westcott House, a liberal college, from 1977 to 1980.

Speaking to The Times yesterday after Dr Williams warned of “important implications” of the consecration of a lesbian bishop in the US, Mr Coward said he was “deeply depressed and frustrated” that Dr Williams had spoken out against Canon Mary Glasspool within hours of her election as a suffragan in Los Angeles, while declining publicly to condemn the proposed new law in Uganda that will sentence large numbers of homosexuals to death and life in prison.

He warned that entire families and networks of friends were deserting the Church of England because of its hostility to lesbian and gay priests, and its refusal to bless the civil partnerships of gay people.

“The direction that Rowan is taking the Anglican Communion is compromising deeply the position of gay and lesbian people,” he said.

“What he is saying about the bishop in the US and what he is not saying about Uganda is disastrous. It just affirms the image of the Church of England as a place of prejudice and homophobia. I don’t think this is the end for the Church, but the future is difficult to predict.

“I am sure he is still the man I knew as being inclusive. I think he must be torn about inside.”

He added: “The part of me that knows Rowan as a friend still values him as a friend. But another part of me is incredibly disappointed. I feel betrayed and let down.”

But he praised Dr Williams’s teaching at Westcott House. “It was the first place I could be comfortably gay,” said Mr Coward, who went there aged 31 after an initial career as an architect.

“I cannot remember if I ever spoke directly to Rowan about it but it was a normal part of the atmosphere at Westcott. It was not an issue.”

Mr Coward was in parish ministry for 15 years and then left to set up Changing Attitude, which lobbies for acceptance of gay men and women in the Anglican Communion.

Mr Coward said the bishop who ordained him, the late Mervyn Stockwood of Southwark, also knew he was actively gay.

The US presiding bishop, Katharine Jefferts Schori, a former oceanographer, is among those who have condemned the legislation currently being considered in Uganda. It threatens life imprisonment or death to those found guilty of “any form of sexual relations between persons of the same sex”.

Bishop Schori said: “The Episcopal Church joins many other Christians and people of faith in urging the safeguarding of human rights everywhere. We do so in the understanding that efforts to criminalize homosexual behavior are incompatible with the Gospel of Jesus Christ.”

Although the Anglican Church in Uganda has not taken a stand on either side, one bishop, Joseph Abura, has criticised opposition to the Bill.

He said: “Christianity in Africa is under attack by gays and Christians in Europe and the Americas. Africans do not need Europeans to teach them what the Gospels say.

“The vice of homosexuality through the necessary laws in place can be checked.”
.
Posted by SUSAN RUSSELL at 4:32 PM

I think way too much is being made out of Rowans' words.

His words are nothing more than a carrot being thrown at the orthodox, GS, etc to try to keep them "at the table".

TEC & Rowan aren't going through a realtionship "break-up"; both know that the other is on "their side".

The orthodox/GS/etc are a completely story so Rowan feels that he needs to appease them in order to keep them in the reconciliation game.

Rowan isn't going to do anything to or against TEC; his words are meaningless to the future of TEC and are only spoken with a nod and a wink.

It's all a game now as far as Rowan is concerned. His goal is to keep the AC "together" while he's Archbishop; nothing more and nothing less.

Seriously, this is the sort of game that my Roman Catholic prelates appear to play: a bit of stroking by Rome, with the promise of purple or cardinal red, and they purr the party line and call it obedience.

I had hoped that the dissenting Church would not be prey to this so genteel and petty bribery. Rowan is favored by Rome, and now sounds Roman.