Don't miss this "must-read" piece from Episcopal News Service by the Reverend Dr. Cynthia Black about reactions to the pending Ugandan anti-homosexuality legislation by those directly IMPACTED by the legislation: LGBT Ugandans!
. 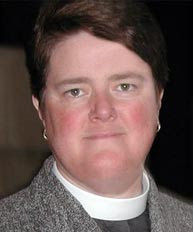 That's what Denis, a field producer for the film Voices of Witness Africa and a gay Ugandan, told me when I asked about current conditions in Uganda for gay folks.

"The witch hunt has begun and will only get worse," said another friend, who asked to remain anonymous.

Sixteen years ago, those same words were spoken just a short distance away in neighboring Rwanda, where, in 100 days, some 1 million Tutsis were slaughtered. A visit to the Kigali Memorial Centre in Rwanda last year reminded me that genocide is never a spontaneous act. Those who committed the genocide in 1994 did not kill a million people overnight. They killed one, then another, then another ... day after day. The victims died one by one, their cries unheard or, worse, heard and ignored.

As the Ugandan Parliament considers anti-homosexuality legislation that could require the execution of some gay and lesbian people, I can't help but wonder what it will take for the cries of lesbian, gay, bisexual and transgender folks in Uganda to be heard. Who will act to stop it? What will the role of the church be?

Read the rest here.
Find out more about "Voices of Witness Africa" here.
.

Posted by SUSAN RUSSELL at 8:22 PM