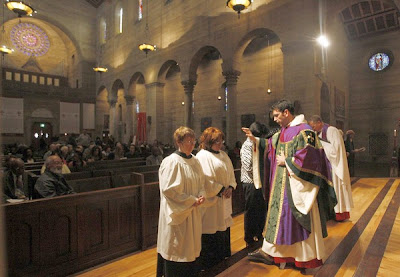 More on L.A. Elections from the L.A. Times:

The spiritual leader of the global Anglican Communion issued an unusually sharp and swift rebuke Sunday to church leaders in the U.S. over the election of a lesbian bishop in the Episcopal Diocese of Los Angeles.

In a terse statement, Archbishop of Canterbury Rowan Williams delivered a warning to Episcopal bishops, clergy and lay representatives about the confirmation of the Rev. Canon Mary D. Glasspool, a lesbian who has been in a partnered relationship for two decades.

"The election of Mary Glasspool by the Diocese of Los Angeles as suffragan bishop-elect raises very serious questions not just for the Episcopal Church and its place in the Anglican Communion, but for the Communion as a whole," Williams wrote.

The archbishop pointed out that Glasspool's selection must be confirmed by leaders of the U.S. church before she can be consecrated as a suffragan, or assistant, bishop. "That decision will have very important implications," he said.

Glasspool must gain a majority of votes from bishops and from standing committees of clergy and lay leaders across the Episcopal Church, the U.S. branch of the worldwide communion. That process will unfold over the next several months as church leaders consider Glasspool and another priest, the Rev. Canon Diane M. Jardine Bruce, who was picked for another suffragan opening in the Los Angeles diocese.

They would be the first women bishops in the diocese's 114-year history.

Williams' message, which came as Episcopalians in L.A. reflected on Glasspool's election at church services Sunday, was his strongest to date on an issue that has reverberated across the communion since 2003, when the Rev. V. Gene Robinson, an openly gay priest, was consecrated as bishop of New Hampshire.

Amid pressure from overseas Anglicans, Episcopal leaders agreed in 2006 to refrain from electing more homosexual bishops. They reversed that moratorium at their national convention in Anaheim in July despite concerns expressed there by Williams about decisions "that could push us further apart."

The Los Angeles diocese is the first to test the more lenient policy.

Glasspool, 55, who now serves as a canon, or senior assistant, to the Diocese of Maryland bishops, was elected to the suffragan position Saturday during the Los Angeles diocese's annual convention in Riverside. Her selection followed that of Bruce, 53, rector of St. Clement's by-the-Sea Episcopal Church in San Clemente, on Friday.

Williams' message appeared to target U.S. bishops, the group over which he may have the greatest sway as the confirmation process begins. He maintained that bishops within the wider communion had "collectively acknowledged that a period of gracious restraint" was necessary "if our bonds of mutual affection are to hold."

Conservative Episcopalians said they were surprised by the unusually blunt language from a religious leader known for carefully parsing his words and layering his arguments, particularly around the explosive issue of homosexual bishops and same-sex marriage blessings, another subject that has set off theological fireworks in the church.

"For a man who prides himself on nuance and understatement, it's a remarkably swift and vigorous response," said the Rev. Kendall Harmon, canon theologian for the Episcopal Diocese of South Carolina. "I didn't expect him to respond this strongly or this quickly. I think Los Angeles underestimated the significance of what they were doing in the international context."

The bishop of the Los Angeles diocese, the Rt. Rev. J. Jon Bruno, argued that the U.S. church has the autonomy and authority to confirm Glasspool regardless of Williams' displeasure.

"I don't foresee how an autonomous Episcopal Church should be influenced by other people's fear of sexuality or homosexuality," Bruno said. "I'm moving forward completely dedicated to Diane Jardine Bruce and to Mary Glasspool, a woman who happens to be a lesbian. I have an obligation as the bishop of Los Angeles to do what my people call me to do . . . to support Mary Glasspool and help her become confirmed."

Glasspool was traveling Sunday and could not be reached for comment. The presiding bishop of the Episcopal Church, the Most Rev. Katharine Jefferts Schori, declined comment on the election, a spokeswoman said.

Several worshipers at St. John's Episcopal Cathedral near USC concluded that Glasspool's sexual orientation was less important to her role as bishop than her experience as a church rector and longtime diocesan official in Maryland. Those interviewed said they believed that both women were chosen on the basis of merit.

"We have to be thankful that we have two extremely qualified people, whether they are men, women, gay or straight," said Clyde Beswick, 59, who was attending morning services in the ornate cathedral.

At St. Mark's Episcopal Church in Glendale, some members said they had yet to make up their minds about Glasspool, while others said her sexual orientation should not be an issue. Still, the decision to elevate the two women priests will be painful for some, acknowledged Bruce Merritt, a member of St. Mark's for about 20 years.

"A lot of people have deep-seated and traditional values and are going to be upset," said Merritt, the parish historian. "I was brought up in the church when homosexuality was bad and women were not accepted. But I think the trajectory is changing."

At St. James' in the City, an Episcopal church in Los Angeles' mid-Wilshire district that welcomes gay and lesbian parishioners, the Rev. Paul J. Kowalewski said the turmoil caused by Glasspool's selection -- and Robinson's in 2003 -- is worth the trouble.

"Any time the church is on the process of change or growth we're going to have to take risks," he said. "If anybody is on the fringes, excluded, we're not doing our job."