A few "short takes" on Marriage Equality in New Jersey 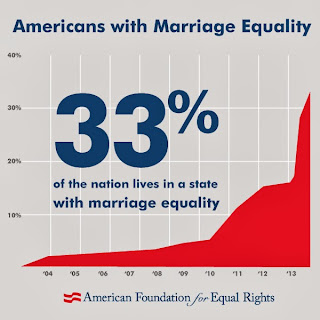 #2 ... QOTD goes to the Reverend Cynthia Black: "We are finally be able to say to our gay and lesbian members, 'The State of New Jersey has finally caught up with Redeemer,'" said the Rev. Cynthia Black, rector of Church of the Redeemer in Morristown, which has been blessing same-gender relationships since 1991. "For the past 22 years, this church has publicly affirmed that all committed and loving couples are equal in the eyes of God."

#3 ... Check out this clip of Newark Mayor (and Senator-Elect) Cory Booker taking on a heckler at one of the first NJ marriages.

#4 ... Finally, check out what Governor Chris Christie had to say when he withdrew the appeal of the Supreme Court ruling:


"Although the governor strongly disagrees with the court substituting its judgment for the constitutional process of the elected branches or a vote of the people, the court has now spoken clearly as to their view of the New Jersey Constitution," the administration said. "Therefore, same-sex marriage is the law."

Yes, this from the same governor who vetoed marriage equality when the legislature passed it in 2012. (So much for the "constitutional process of the elected branch.")

It just gets curiouser and curiouser. AND -- there is marriage equality in New Jersey. Woo Hoo!

Posted by SUSAN RUSSELL at 4:54 PM

Looks like Chris Christie was hoping that the Court would do his dirty work for him and keep him off the hook with his constiuency.

"Dirty work?" Seriously??? Unfortunate choice of words for actions that will give equal protection to scores of New Jersey couples.

AND ... coming from the dude who manipulated the election process to make sure the Cory Booker voters weren't in the ballot box when he was up for re-election it's hardly a surprise.

Not following your second para, Susan. I'm not challenging it, I'm asking for info as I'm not familiar with what you're talking about.

And I'm not following what you're asking. Second paragraph of Christie item? The one with the link to the news report about how he vetoed the marriage equality bill passed by the legislature in 2012?