The ACA -- When "the simple" isn't so simple 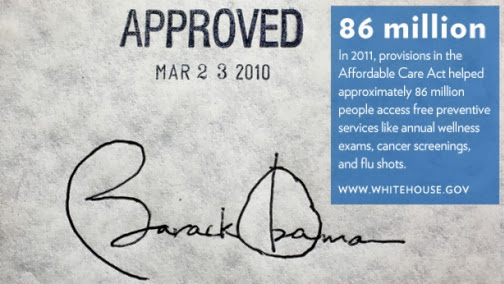 On an email list serve, one colleague made the following comment in the discussion about the debate over the Affordable Care Act (ACA):


This can all be worked out - a simple one year extension to the rollout of the ACA so everyone starts on the same footing seems like a decent compromise.

Two years ago today -- October 7, 2011 -- my wife was diagnosed with an abdominal tumor ... a metastasis from her bout with renal cancer 11 years before. Without the ACA ... which for all the talk of "roll out" has been having a positive impact on health care for Americans since it was signed into law in March 2010 ... she would not have had access to the insurance she needed to cover the treatment her aggressive cancer called for because of her "pre-existing condition."

The Affordable Care Act made Louise's battle with kidney cancer in 2000 a part of her medical history that informed her treatment in 2012 -- not a pre-existing condition that prevented her from receiving treatment in 2012. Because of the ACA (aka "Obamacare"), not only did Louise have options for her fight with cancer, but she had the health insurance she needed to exercise those options. She had phenomenal doctors, nurses, and health-care teams at the Norris Cancer Center and at Keck/USC Hospital who did absolutely everything they could until there was nothing left to do -- and then with grace and abundant sensitivity enabled us to send her off with peace and dignity on Sept. 2, 2012.

And I was left "just" coping with the grief and loss of a beloved spouse, not the helpless anger of not having been able to give her the best possible health care she needed and deserved. So by all means, let's fix what needs fixing with the ACA. Nothing worth doing isn't worth improving.