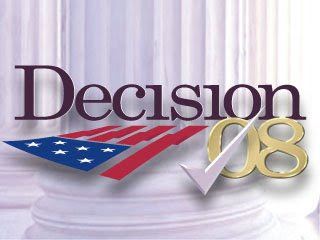 I'm sure it feels that way everywhere, as the November 4th Election Day looms closer on the calendar, but here in California "I gotta tell ya" (as one of my favorite bishops likes to say!) ... it really IS "all election all the time" as the Propostion 8 battle gets hotter and hotter.

Let's start with the mounting controversy on the "Yes on 8" ads running on California television. Although they're full of fear mongering and bald-face lies in general, in specific there's one being run featuring children attending their lesbian teacher's wedding (WITH their parents permission) being run over-and-over-and-OVER again by the Yes on 8 folks WITHOUT the parents permission!

Here's a YouTube clip of the press conference where those parents (RIGHTLY!) demanded that the commercial be pulled:


Meanwhile, the Yes on 8 campaign continues to laud this new, abusive ad using unauthorized images of children without their parents' knowledge or consent. And they're proud of it. From their website: "Our new ad gives us great hope."

(If those are what they call "Family Values" then they can keep them!)

Meanwhile, in other news:

From the New York Times report -- "A Line in the Sand"

Tony Perkins, president of the Family Research Council, a conservative Christian lobby based in Washington, said in an interview, “It’s more important than the presidential election.”

When my loving parent walked me down the aisle last month and I legally married the woman I have shared my life with for almost 17 years, it didn't hurt your marriage or anyone else's. It didn't take away any church's tax-exempt status, and it didn't have any impact whatsoever on curriculum in California public schools. Instead, it gave me the same rights, protections and dignity enjoyed by straight folks. That's only fair.

Also from the L.A. Times, Steve Lopez's profile on Fr. Geoff, "Gay priest is true to his faith:"

"They said I've caused scandal to the church," he said. "I think the real scandal is the thousands of gay and lesbian children who feel abandoned by the church of their baptism."

Posted by SUSAN RUSSELL at 4:12 PM

Oh, right. Of course. That's because they are.

Not sure if it's permanent, but www.protectmarriage.com has been off-line for several hours now.

Yup, hysteria is a sign of the times because the wrong wing knows it has lost. Lost now in California, and lost in the long run across a country where most young folks think they are nuts.

I hope we will soon see 'family formation' as a civil right and 'holy whatever the faith community calls it' as a separate matter. Then we bad, evil, lake of fire bound types can do what we do while the holier than god types don't do whatever.

So much for family values. At a rally on our campus last week, apparently people were walking around the edges of the group telling people "if you support gay marriage, Vote Yes!" If that's not morally bankrupt I don't know what is....

I've assembled a rebuttal to their common arguments at Who Voted on YOUR Marriage?

I'm no lawyer, and I've never played one on TV.

But surely the children have the right to the use of their own image, and there is a grounds for a lawsuit if the ads were not removed immediately.

There would be a lot of merit in forcing these bigotted liars to expend their resources on lawsuits - and I should think there would be some progressive lawyers who'd be game to take on the suit pro bono.

In the recent Canadian election, the Liberal Party (the maybe or maybe not slightly less right wing party) used illegally acquired footage of a couple in one of their ads. When the couple (both of whom supported the progressive New Democratic Party) complained, the ads were taken down immediately and edited.

If Canada's Liberal Party - who make Senator Ted Stevens seem honest by comparison - can do the right thing, surely pretendy values voters in California can do the same.