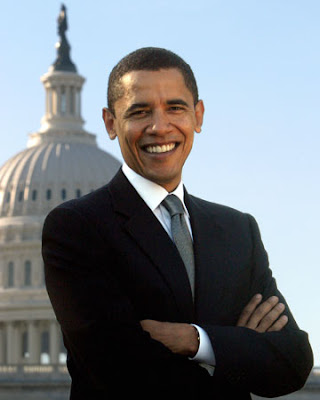 WOW
of course I am observing, and writing this from the other side of the 49th paralell, but I can't help but be mighty glad and grateful for my American brothers and sisters. What a riches of choices when one party can offer up both a Hillary and Barrak in the same election.

Following on the elections and consecrations of +Gene, ++Katherine, and ++Fred in our Church can one do anything less than give heartfelt thanks for the wonder of being alive at this time- as complicated and confusing at they might appear some days?

Thanks Susan+ for sharing this.

No surprise. Fidel Castro has endorsed him, too. Birds of a feather.

What is truly noteworthy is that the LA Times and Chicago Tribune have never endorsed a Democrat. It is a small ray of hope that the "fear" tactics of the radical fringe is failing -- and rightly so. We are the children and grandchildren of the Greatest Generation, we are made of stronger and better stuff.
Now if we could just get the Politcos working on the economy; remember how everyone in DC went rushing around to pass the bailout -- and now nothing but silence. Boy the silence is even more scary.

The next endorsement I'm praying for is the one that is reportedly coming from Colin Powell.

The Times criticizes Sarah Palin (correctly) because she is inexperienced.

Then goes on to laud the top of Democratic ticket because of his inexperience.

Staggering in its dichotomy.

Palin is bad as the second fiddle because she is so inexperienced.

Obama is great as the top pick because he understands his inexperience and will turn his administration over to a committee.

Jim of l town
I think there might be one bit of the essay you missed
'Obama inspires confidence not so much in his grasp of Wall Street finance but in his acknowledgment of and comfort with his lack of expertise'
It's called humility, the courage to seek out the advice and answers one might not have.

To David: I guess I like my leaders just a little more confident.

Not W arrogance mind you, but just a little more confidence and expertise for a President would be nice.

Just months ago, there were Hillary Clinton supporters (including a woman priest from New Jersey) would loudly and angrily said she would likely support McCain if Clinton lost her bid.

How things have changed.

I was just pointing out the ridiculous, and logically tortured argument of the Times.

For me, I'm set to be disappointed (again) for four years.

I'm looking for a new countdown clock no matter who gets elected.

Even Joe Biden said today that the world will test Obama with an international crisis within the first six months of his presidency. Fidel, Hugo and their like-minded comrades, of course, want to see Obama taking the test and not McCain, because they hope, and fully expect, Obama to fail. It is telling that Biden apparently doesn't think the world would bother trying to test John McCain, because folks like Fidel and Hugo know that McCain would pass.

Don't get me wrong. McCain is just the lesser of the two evils, especially on domestic issues. If you ever want to get the government out of your bedroom and out of your wallet at home, and out of other peoples' business overseas, vote for Bob Barr, like I did this morning. Being consistent, this straight white male also voted 'no' on Florida Amendment 2.

"
Don't get me wrong. McCain is just the lesser of the two evils, especially on domestic issues."

No, McDubyah is evil; especially on domestic issues.