A whirlwind of gay weddings 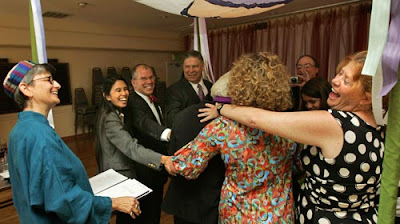 "Even though I've just been crazy busy, it feels like such an extraordinary moment in time and it feels like such a blessing to be with these couples," said Edwards, 56, whose temple -- better known as BCC -- bills itself as the first synagogue for lesbian, gay, bisexual and transgender Jews. (The congregation has straight members as well.)
The rush to the altar is triggered by the possibility that voters might approve Proposition 8, the California ballot measure that would override the court ruling and ban legal gay marriage. But couples marrying now hope that will still leave their marriages legal.
The California Supreme Court ruling that the state cannot prohibit same-sex marriages doesn't require religious organizations to recognize them. But clergy whose faiths sanction gay marriage -- particularly those with large gay congregations -- have found their schedules similarly affected.
=======
.
And a big AMEN to that one! It is an absolute whirlwind here ... between the press & political ramifications of the impending election, the pastoral work with those considering marriage, preparing for marriage or freaking out that they won't be ABLE to get married (if the election goes the wrong way) and then there's the liturgical impact of not just planning but presiding at all these weddings.
.
See, you're tired just reading about it, aren't you?
.
All of this is my way of saying VERY publicly that if I've told you I'll do something and haven't followed through yet; if you ask me to do something and I don't manage to pull it off; if I'm behind on any other deadlines, to-do lists or commitments I'm asking for blanket absolution until November 5th when life gets back to at-least its chaotic life-as-we-know-it-at-All-Saints-Church.
.
Posted by SUSAN RUSSELL at 11:11 AM