THE CASE FOR GOD 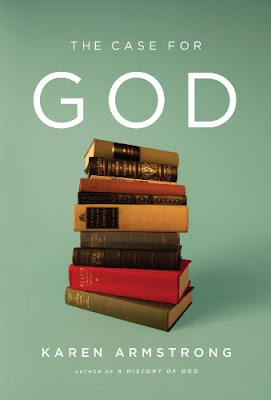 "One of the conditions of enlightenment has always been a willingness to let go of what we thought we knew in order to appreciate truths we had never dreamed of." -- Karen Armstrong
.
=====
.
So our annual staff reflection day is coming up next week and Karen Armstrong's new book is our "assigned reading" for the day.
Some notes:
MYTH: "... essentially a program of action. It could put you in the correct spiritual or psychological posture, but it was up to you to take the next step and make the "truth" of the myth a reality in your own life. The only way to assess the value and truth of any myth was to act upon it.
Put into practice, a myth could tell us something profoundly true about our humanity. It showed us how to live more richly and intensely , how to cope with our mortality, and how creatively to endure the suffering that flesh is heir to. But if we failed to apply it to our situation, a myth would remain abstract and incredible.
Myth and ritual were thus inseparable, so much so that it is often a matter of scholarly debate which came first: the mythical story or the rites attached to it. Without ritual, myths made no sense and would remain as opaque as a musical score, which is impenetrable to most of us until interpreted instrumentally.
RELIGION: Religion, therefore, was not primarily something that people thought but something they did. Its truth was acquired by practical action. It is no use imagining that you will be able to drive a car if you simply read the manual or study the rules of the road. You cannot learn to dance, paint or cook by perusing texts or recipes.
As theologians began to adopt the criteria of science, the mythoi of Christianity were interpreted as empirically, rationally and historically verifiable and forced into a style of thinking that was alien to them.
In particular, the word "belief" changed, so that a credulous acceptance of credal doctrines became the prerequisite of faith, so much that today we often speak of religious people as "believers" as though accepting orthodox dogma "on faith" were their most important activity.
[Big Finish]
Fundamentalism and Atheism: This rationalized interpretation of religion has resulted in two distinctively modern phenomena: fundamentalism and atheism. The two are related. The defensive piety popularly known as fundamentalism erupted in almost every major faith during the twentieth century. In their desire to produce a wholly rational, scientific faith that abolished mythos in favor of logos, Christian fundamentalists have interpreted scripture with a literalism that is unparalleled in the history of religion.
Atheism is dependent on the form of theism it seeks to eliminate and becomes its reverse mirror image ... [so recent] atheism has focused exclusively on the God developed by the fundamentalisms. The popularity of [Dawkins, Hitchens & Harris] suggest that many people are bewildered and even angered by the God concept they have inherited.
In fact, new atheists are not radical enough. Jewish, Christian and Muslim theologians have insisted for centuries that God does not "exist" ... not to deny the reality of God but to safeguard God's transcendence.
One of the conditions of enlightenment has always been a willingness to let go of what we thought we knew in order to appreciate truths we had never dreamed of.
Posted by SUSAN RUSSELL at 2:57 PM

I said to a friend last night that the older I get, the less religious and more spiritual I become. Perhaps that's a phase that I will morph out of over time. Heaven (!) knows...

This is definitely not a book that would pass a peer review committee.

Karen Armstrong is one of my favorite authors! I have just started reading "The Case for God" and I love it!

I''m looking forward to reading it but this kind of thing frustrates me: Atheism is dependent on the form of theism it seeks to eliminate and becomes its reverse mirror image ..

ATHEISM DOES NOT SEEK TO ELIIMNATE THEISM. Some atheISTS do, but for most of us, it's simply a descriptor.

Some of my best friends are theists. i'm married to one. I even go to church on Sundays. I agree that militant NEW atheism is a reflex against fundies, but atheist is too broad a term for this purpose.

What is Enlightenment? --Personally, I don't believe there is such a thing... [deduced after 25+ years of searching for it].

All the rational thought in the world cannnot replace the sheer beauty of Solemn High Mass.

A Solemn High Mass, doesn't compare to the spiritual oneness achieved from sitting in to center of Nature's Grandeur surrounded by the sounds of nature.
Sarah

The beauty of the solemn high mass, and the beauty of nature - yes, I've walked amid the Redwoods - pale in comparison to the beauty of messy relations, individuals struggling with the sea anchors of their own education and upbringing, and their interactions with others wading through the wreckage of their own histories. All in the middle of their own hormones and agendas. What an amazing beauty lies inside all of this! No wonder that God love the world so much!!

Actuallly, I don't believe in anyone's god. I'm not into disproving god; I just don't want anyone doing things with me, my time, my efforts or my money while claiming that someone invisible tells them that they have to make me do this.
If Gene Robinson wants to mince around in a chasuble, that's his business; if he wants me to take my money away for something without my permission, that's my business.

Brad, Just about every time someone tells me about the god they don't believe in it turns out NEITHER DO I!!

Try checking out Karen's book ... she makes a very compelling case for the importance of atheism in theological discourse!

In philosophy they have a word for this its is called Pragmatism.