I watched it live from Washington (thanks, CSPAN!) trusting my Dodgers to keep-it-up against the Cards without me for a few. 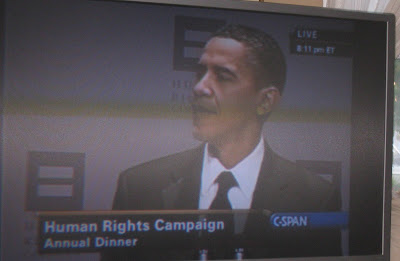 I took a bunch of notes -- but this AP article captures both the essence and the energy of the speech that won't have gone far enough for some but was infinitely more than I could ever have asked for or imagined from a sitting United States President.

Promising to sign the Hate Crimes Bill coming to his desk.

And to overturn DOMA.

And to support a fully inclusive ENDA.

And no, we didn't get full support for marriage equality out of him. Odds are we won't. And we're going to get it anyway. Marriage Equality.

So here it is. On the record. I'm hopeful. I'm encouraged. I believe change is not only going to happen, I see it happening. And tonight that is something to celebrate. (That and the Dodgers sweeping the NLWest.)

We have audacious goals we have not yet reached. And tonight was an incremental victory. Let us rejoice and be glad in it.

WASHINGTON — President Barack Obama pledged to end the ban on homosexuals serving openly in the military in a speech Saturday, but acknowledged to a cheering crowd that the policy changes he promised on the campaign trail are not coming as quickly as they expected.

"I will end 'don't ask-don't tell,'" Obama said at the annual dinner of the Human Rights Campaign, a gay civil rights advocacy group. Obama reaffirmed his commitment to end the ban, but did not give a timetable or the specifics that some activists have called for.

The law was passed by Congress in 1993 and signed by President Bill Clinton, who also promised to repeal the ban on homosexuals in the military but was blunted by opposition in the military and Congress.

"We should not be punishing patriotic Americans who have stepped forward to serve the country," Obama said. "We should be celebrating their willingness to step forward and show such courage ... especially when we are fighting two wars.

"I appreciate that many of you don't believe progress has come fast enough," Obama said. "Do not doubt the direction we are heading and the destination we will reach."

Obama also called on Congress to repeal the Defense Of Marriage Act, which limits how state, local and federal bodies can recognize partnerships and determine benefits. He also called for a law to extend benefits to domestic partners.

He expressed strong support for the Human Rights Campaign agenda — ending discrimination against gays, lesbians, bisexuals and transgender people — but stopped short of laying out a detailed plan for how to get there.

"My expectation is that when you look back on these years you will look back and see a time when we put a stop against discrimination ... whether in the office or the battlefield," Obama said.

Obama's political energies are focused on managing two wars, the economic crisis and his attempt to reform the health care system.

His message Saturday was one of unity and support for a group that has funneled large amounts of money into Democratic coffers.

Since Obama took office in January, some advocates have complained that Obama has not followed through on promises on issues they hold dear and has not championed their causes from the White House, including ending the ban on gays serving openly in the military and pushing tough nondiscrimination policies.

"The president and Nobel winner came and paid his respects, but tomorrow many will ask: What's his plan, what's his timetable?"

In the past, Obama has urged the gay-rights community to trust him. In June, he pointed to some initial efforts, such as a presidential memorandum he issued that expands some federal benefits to same-sex partners.

Obama publicly has previously committed himself to repealing the "don't ask, don't tell" policy that allows gays and lesbians to serve in the military as long as they don't disclose their sexual orientation or act on it. But Obama hasn't taken any concrete steps urging Congress to rescind the policy, and his national security adviser last weekend would only say that Obama will focus on overturning it "at the right time."

Obama also pledged during the campaign to work for repeal of the Defense of Marriage Act. But lawyers in his administration defended the law in a court brief. White House aides said they were only doing their jobs to back a law that was already on the books.

The gay community is somewhat split as to whether Obama should be expected to produce results right away.

The Human Rights Campaign, which invited Obama to speak at its dinner Saturday night, said it remains hopeful of seeing more action.

"He's obviously the most supportive president and has done more than any president" on behalf of the gay community, said Joe Solmonese, the group's president. He said the Obama administration has been working with the group on a range of issues "on an almost weekly and sometimes daily basis."

Rep. Barney Frank, an openly gay member of Congress, notes there has been some progress such as new hate-crimes legislation, which would make it a federal crime to assault people because of their sexual orientation. Approved by the House this week, Obama predicted it would pass the Senate and promised to sign it into law. Frank, D-Mass., also said the gay rights community understands "there is a legislative process" and progress can't happen overnight.

Posted by SUSAN RUSSELL at 7:15 PM

I haven't written off this President, but I do have to admit that I am tired of hearing those in positions of power pledge to do XYZ for our community, and then it doesn't happen.
This summer's General Convention was the best thing to happen in a while, and more than I could have ever imagined. So at least the Episcopal Church is making progress, and gives me hope (even if my own diocese seems to be lagging behind).
When there are bills introduced, and backed by the administration, to end DADT and DOMA, and when we finally get ENDA passed... that will be action.
May it come sooner rather than later.