We received word today that John Harris Burt -- retired Bishop of Ohio and former rector of All Saints Church, Pasadena -- died this morning at the age of 91. A tireless advocate for peace, justice, compassion and equality, +John Burt's prophetic ministry here at All Saints Church in Pasadena was an important source of the DNA of social justice that is a cornerstone of the All Saints Church work and witness.

These newspaper clippings from the All Saints Church archives show John Burt with Dr. Martin Luther King, Jr. when he spoke for racial justice here in Los Angeles in 1964 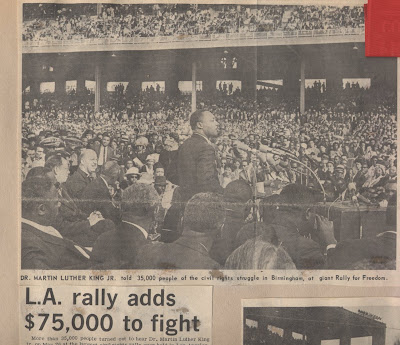 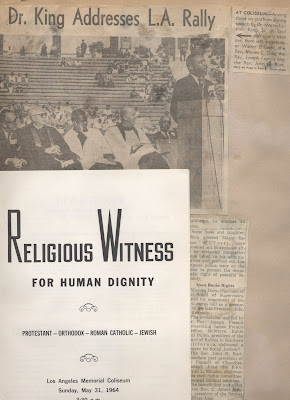 The story the news clippings do NOT tell is the one about the death threats he received because of his witness for human dignity in the crucible of the Civil Rights Movement.

From today's ENS obituary:
Retired Bishop of Ohio John H. Burt died October 20 at his home on the southern shore of Lake Superior in the Upper Peninsula of Michigan. He was 91 years old.
.
In a career spanning five decades, Burt dedicated himself to social reform, racial and gender justice and ways in which the world's churches could work together to effect positive social and political changes. Believing that "the world alters as we walk in it," he stood out as a leader in seeking ways in which the church could respond to the complex challenges of the 20th century.

Burt became the rector of All Saints Episcopal Church in Pasadena, California, in 1957 and transformed that church into one of the largest and most active voices for social change in the country. As an advocate for social justice in the 1960s, Burt's name was linked with both local and national social and political activity.
As president of the Pasadena Community Planning Council, he coordinated the work of welfare and other civic organizations. In 1963 he was a co-sponsor of the "Rally for Freedom," Los Angeles's largest civil rights rally until that date, at which Dr. Martin Luther King spoke to 35,000 supporters of freedom fighters in the South.
The night before, Burt convened a "Town Meeting for Democracy" with Dr. King at the Shrine Auditorium in Los Angeles, which was attended by both Democratic and Republican Senators as well as Hollywood celebrities, a bomb threat was called in to his home, and the LAPD bomb squad was summoned.
Burt was elected bishop of Ohio in 1967 and served until his retirement in 1984. During his tenure, he was a vocal opponent of the war in Vietnam, speaking at rallies in Cleveland and Kent State.
He gained national attention when the Presiding Bishop named him to be a delegate on an interfaith global tour which took him to South Vietnam and culminated in an International Inter-Religious Symposium of Peace in New Delhi. The symposium was the first in history to gather around a single conference table leaders of the Hindu, Moslem, Shinto, Taoist, Buddhist, Christian and Jewish traditions.
.
Read the rest here.
.
Services will be Friday, October 30th in Marquette, Michigan.

Give rest, O Christ, to your servant with your saints,
where sorrow and pain are no more,
neither sighing, but life everlasting.

Posted by SUSAN RUSSELL at 4:17 PM

Requiat... He spent three weeks with us at Trinity, Princeton in the late 1980s and was wonderful.