Bishop Senyonjo: 'God is not only for heterosexuals' 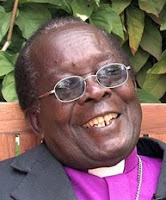 [Episcopal News Service] Retired Bishop Christopher Senyonjo of Buganda has a simple, if dangerous message: "God is not only for heterosexuals … [if you are gay] accept yourself, love yourself."

Senyonjo, 78, recently kicked off a six-week speaking tour at St. Paul's Church, Pomona, in the Episcopal Diocese of Los Angeles to raise awareness about repressive anti-gay policies in Uganda, where lawmakers recently considered imposing a death penalty on gays.

He also called upon advocacy groups to network to help develop the LGBT (lesbian, gay, bisexual and transgender) and other under-served communities in Uganda and to promote understanding and education.

The married grandfather of 11 has been compared to Archbishop Desmond Tutu and Martin Luther King Jr. because of his outspoken gay rights activism. His advocacy was born of listening to the struggles of others, he said recently.

"The church should be on the side of those who suffer, who are persecuted and who have been misunderstood," he told about 75 people gathered at the May 11 forum in Pomona. "To me it is sad. Very often, people go to the Bible and read it the way they want to and say if you don't read the Bible this way you are out, an outcast. I know; because I've been there."

But, he added: "Christ came to bring justice and love. Culture is not static and Christ can transform culture," he said, noting "Christ's imperative was to love, not to hate your brother because he is different."

Find out more.
Posted by SUSAN RUSSELL at 2:49 PM

still not clear on Bishop Senyonjo's viewpoint of homosexual practices. Please illuminate. Does he preach that same sex practices are acceptable in God's eyes? I'm thinking he wants homosexuals to be welcomed into the Church [which they are], but he wants them to reconsider their fornication practices as wrong and against Biblical teachings....

Sigh. LGM, just think. Are you defined by how you have sexual relations? If you and your spouse were unable to be physical with each other, would you still be spouses? Please stop, just STOP trying to reduce our faithful monogamous relationships to rutting animal behavior and just try, for once, to figure out that we are no different from you aside from one tiny little detail.