Consecration News Round Up 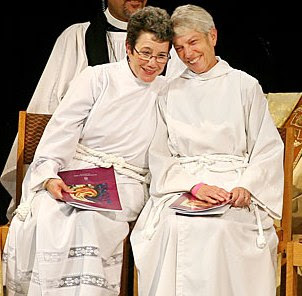 As the purple-dust starts to settle from Saturday's historic consecrations here in L.A. so do the news reports. While engendering nowhere near the controversy +Gene's November 2003 consecration did, there's been plenty of news and blog coverage. Here are some ...


The British press had this to say:

Finally, Episcopal Life just posted this great piece on Bishops Diane and Mary on their first-day-on-the-job, which begins: "The two newest bishops in the Diocese of Los Angeles and the Episcopal Church didn't waste any time getting right down to ministry."

And now I think it's time to return everybody to the regularly scheduled programs. Thanks for tuning in to this episode "The Diocese of Los Angeles Makes History." Stay tuned for future episodes!

Posted by SUSAN RUSSELL at 3:37 PM

From the intro in the news video: "It actually happened again . . ."