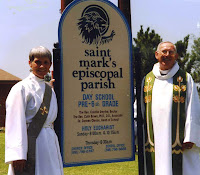 So as we continue on Consecration Countdown here in Los Angeles, all this talk of ordinations, consecrations and the like sent me into a somewhat nostalgic place ... which was exacerbated by finding some old pictures stacked in the corner of my home study. Some of them are here ... photos from my time as a deacon at St. Mark's in Altadena and one I didn't even remember I had of my first Eucharist in January 1998.

On that Sunday in January, Mary Douglas Glasspool had already been a priest for 16 years -- and Diane Jardine Bruce was celebrating her first Eucharist down in Orange County. (Diane and I were in the same ordination class.) And in a few short days
we'll all be celebrating again as we watch the Holy Spirit make two new bishops for the Church of God and two new pastors for the people of the Diocese of Los Angeles.
Posted by SUSAN RUSSELL at 5:09 PM

Will there be any webcast of the consecration ceremony? I've been looking, but have not seen anything.

What it says about streaming is:

Live Webcast & Video on Demand: There will be limited live video streaming available with priority to out-of-state viewers. To arrange access, please email webcast@ladiocese.org. After the liturgy, on-demand viewing will be available via the diocesan web site.

Thank you, Susan. I knew I could count on you for accurate information. Let us rejoice with Diane and Mary!