There is not a single, reasonable excuse for reading what David Virtue writes ... except sometimes you just can't help yourself.

And while that does not hold water as an excuse, it is by way of explanation how I ran across this quote du jour from the Great Drama Queen of Schismania:

We are within days of one of the most serious breaches in the ecclesiastical life of the Anglican Communion ... [an] act that will pour hot coals of fire on the Episcopal Church and further enrage Global South Anglican leaders who have pleaded with both the Archbishop of Canterbury and the Episcopal Church not to proceed with this consecration

See also -- "The sky is falling, the sky is REALLY falling. this time we really, really mean it: the world as we know it is ending, the final crisis is upon us."

Kind of reminds me of that great quote from Oscar Wilde: "Be yourself. Everybody else is already taken." 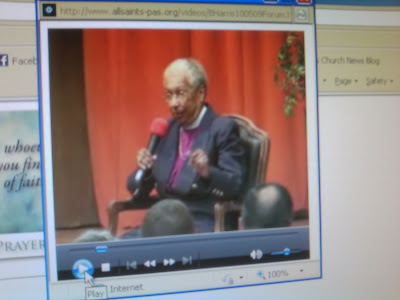 Because it turns out the role of "final crisis" is already taken. At least according to Bishop Barbara Harris, who was with us here in the All Saints Church Rector's Forum yesterday and had this to say:

So "the final crisis" was actually back in 1988 when Barbara Harris was elected bishop suffragan of Massachusetts? Then what is it that keeps the wheels of schism still rolling after all these years? Could it be that those who keep fanning the embers of schism and division are just committed to keeping the fight going?

Maybe we should get t-shirts printed that say, "We survived the Final Crisis."

Maybe we should just gear up to celebrate the ordination of two faithful priests as two fabulous bishops and let the ember fanners flap away.

I think Bp. Harris did a spectacular job as a final crisis! Maybe the tee shirts should be: I am having a mid-life final crisis?. I note that the schismatics are mostly of an age.

I'm having ANOTHER final crisis? The possibilities are endless.

If I had a picture of Virtue I would photoshop him onto CHicken Little.

I vote for "...gear(ing) up to celebrate the ordination of two faithful priests as two fabulous bishops"!

After all, despite having more than twenty years to prayerfully consider the magnificence of the gifts of the spirit to all, the whiners apparently will always be with us.

"I'm having a final crisis and I can't get up!"

Seriously, I am so happy for all of you in LA, CA, and will join in the chorus of voices that sings the praises of both these women. Huzzah from FL!

Perhaps it should be, "We have met the final crisis, and it is us!" (Apologies to Pogo)

Good Heavens, Susan! Are there no zoos in your area? You can always go and watch chimps flinging poo there!

An entirely inside joke, which I will explain if asked:

"Crisis us! Crisis us like a desperate stoat in heat!"