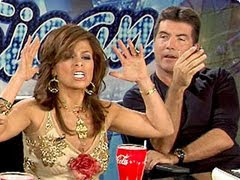 “The American people have had years of watching Paula’s judging expertise, and they know that she is fair,” said Sen. Jeff Sessions (R., Ala.), top Republican on the Senate Judiciary Committee. “She’s certainly fairer than Simon.”

As to the criticism that sometimes on “American Idol” Ms. Abdul seemed to be not all there and had nothing to say, Sen. Sessions said, “You could say the same thing about Clarence Thomas.” More Borowitz here.
Posted by SUSAN RUSSELL at 8:28 AM