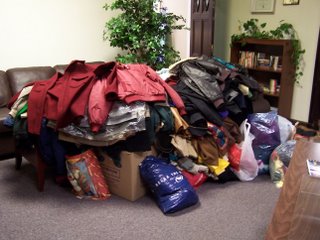 PASADENA - It's not up there with lust, wrath and that seasonal favorite, gluttony. But if you have more than one coat in your closet when others have none, it's your official "sin coat."
Judging by the quantity of faux fur and tweed piled up in the rector's office at All Saints Episcopal Church on Tuesday, there was enough closet sin going on in Pasadena to clothe the multitudes.

Sunday's sermon by the Rev. Ed Bacon contained a simple message from John the Baptist: "If you have two coats, share with the person who has no coat."

To drive the message home, Bacon also quoted a fourth-century bishop preaching on an earlier Advent Sunday: If you have more coats in your closet than you need, the excess are "sin coats" that should be given to the poor.

So, on one of the coldest days of the year, volunteers sorted through the resultant piles of donations Tuesday. They packed the estimated 300-plus garments five to a bag, ready for delivery to homeless agencies including Pasadena's Union Station and Dolores Mission in Los Angeles.

All Saints parishioner Dale Sorenson, 79, of Mount Washington, was one of many inspired to root out sin in their closets.

"I remembered a jacket I thought would be worthy, then I looked and saw three jackets plus nine sport coats I'll never get into again," he said, musing on the sin of overeating. "They're really nice and I hate giving them up, but I know I'll never see 155 pounds again!"
Some dug deep for their donations.

"People gave up things they'd held on to for a while," said All Saints' Maren Tompkins. "One Navy veteran gave a peacoat he's kept for 51 years."

Then there was the World War II-vintage duffel coat, the rabbit fur-lined coat, 10 brand-new coats from an anonymous donor and some mystery garments volunteer Rod Leonard needed fashion advice on: men's pile, or women's?

Anita Davis, a 20-year All Saints parishioner, said she wasn't entirely surprised at the response by the 3,500-member congregation because of its history of helping others. "I bet this becomes a tradition," she said.

Posted by SUSAN RUSSELL at 1:26 PM