... they celebrated their new Dean on Saturday! 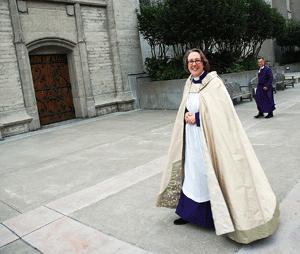 Nothing unusual about that. Deans come and deans go ... kind of like rectors and bishops do. When one goes we thank them and send them off ... when one comes we welcome them and celebrate a new ministry.

So here [pictured left] is the now Very Reverend Dr. Jane Shaw ... the new Dean of Grace Cathedral on Nob Hill in San Francisco. I've had the privilege of working a bit with Jane ... some during our run-up to Lambeth Conference 2008 and some with mutual colleagues in The Chicago Consultation. I found her bright, insightful, faithful and occasionally funny ... all nice features in a dean. She's also a very credentialed academic and (I understand) quite a fine preacher.

Which was so interestingly "not an issue" -- in the press or on the blogs or really anywhere else that I could find. And how refreshing is that???? I love that "Cathedral Elects Lesbian Dean" is not only NOT "breaking news" ... it's barely news.

I did find one article, though. From the Bay Area Reporter ... and interestingly enough the feature concludes with some observations about how "non-newsworthy" Dean Shaw's election has been:

"There's been very little press hoopla around the fact that [Shaw] is an open lesbian," and that "speaks to the fact of where the Episcopal church is today, that sexual orientation has little to do with the choice of people for this position," said [Integrity Board member Louise] Brooks.

She said Shaw "will be the voice of a different type of Christianity ... conveying a message that everyone is a beloved child of God, and that there is no asterisk that says 'unless you're gay, lesbian, bisexual or transgender.'"

And let the people say, AMEN! ... right after they say "Welcome to the neighborhood, Dean Shaw!"
Posted by SUSAN RUSSELL at 5:21 PM

We will look forward to a visit to Grace Cathedral on our next trek up north (my home territory). Meanwhile, what a relief that she's not The Lesbian Dean, but the Dean....who happens to be lesbian. NOT the most interesting thing about her, and we look forward to a prophetic voice.

WHich no doubt will go down easier with that British accent. ;-)

It's not that no one cares, it's just that our Church is fading from relevance of the greater Christian community so naturally it's ignored.