Speaking of the Anglican Covenant: Is it time to cue Tom of Warwick yet? 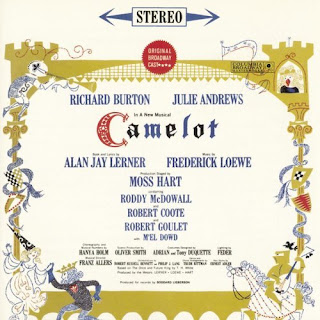 Camelot. It's one of my favorite musicals.

I grew up listening to the original Broadway cast album -- vinyl, of course -- over and over and over again. Richard Harris. Julie Andrews. Robert Goulet.

What's not to like about knights in shining armor committed to the noble ideals of the Round Table? About radical ideas like using the power of might FOR right -- not to mention cool costumes, great music and a juicy love story.

We know, of course, that Camelot didn't last. The noble ideals of that Round Table couldn't withstand the quarrelling and bickering of those who wanted to return to those halcyon days of yesteryear where might MADE right and to get back to bashing heads rather working across differences.
And at the end of the play ... when King Arthur has lost not only his dream of a new kind of kingdom but his wife and his best friend ... as he prepares to lead his troops into a battle he'd hoped never to have to fight ... he tells the story of the ideals that lay in shattered all around him to a boy -- to Tom of Warwick --in hopes that Tom will carry those ideals into the future and that maybe, just maybe, the vision he had for Camelot would survive -- if only in the imaginations of those who heard the story.

So what I'm wondering today -- as the troops gather to do battle across the pond this week over what has come to be known as The Anglican Covenant -- is if it might not be time to put out a casting call for a Tom of Warwick.

I'm wondering as I read the blogs and counter-blogs and points and counter-points if the Communion we're fighting over isn't already as much in ruins as King Arthur's Camelot was by the end of Act II of the musical I grew up singing along to.

And I'm wondering if the grand experiment of Anglican Comprehensiveness isn't already in the dustbin of history as yet-another doomed-by-naiveté scheme to call us beyond our worst-into-our-best selves.
Or not.
I don't know about you, but I'm not ready to give up on the ideals that infuse the DNA of our historic Anglican tradition without a fight. Forged out of the crucible of the English Reformation our spiritual ancestors found "a way where there was no way" to hold in tension the seemingly irreconcilable challenges of their day. And surely it can't be harder to figure out how to be gay and straight together in the 21st century than it was to figure out how to be catholic and protestant together in the 16th!
They didn't need an Anglican Covenant to make that happen and neither do we.
What we need is to know our history. To claim our tradition. To empower our leaders. And to mobilize those who don't yet recognize what's at stake in these debates to stand up and speak out before it's too late. Before the dream of Communion is as remote as the dream of Camelot became.
Am I convinced we can do it? Of course not. But I'm convinced we're called to try -- because we've been privileged to be part of the grand and noble experiment of Anglican Comprehensiveness and it's our job to preserve it to pass on to future generations ... not stand by and watch it be thrown out in the bathwater of global Anglican politics: not let it all have been "one brief shining moment." We CAN do better than that!
So let's not cue Tom of Warwick just yet. Let's keep working. And -- of course -- praying:

Posted by SUSAN RUSSELL at 5:14 PM

but it's not the earth the meek inherit - it's the dirt!

So very well said. "Each evening from December to December..."