Christmas came a little bit early for those opposed to the Covenant proposal wending its way through the "discernment process" in the Anglican Communion. It came in Section 5 of the Oxford Statement issued on November 24th by the GAFCON bunch*:

For the sake of Christ and of His Gospel we can no longer maintain the illusion of normalcy and so we join with other Primates from the Global South in declaring that we will not be present at the next Primates’ meeting to be held in Ireland. And while we acknowledge that the efforts to heal our brokenness through the introduction of an Anglican Covenant were well intentioned we have come to the conclusion the current text is fatally flawed and so support for this initiative is no longer appropriate.

Signed by a number of Primates and some other episcopal flotsam, this is ... for all intents and purposes ... a: 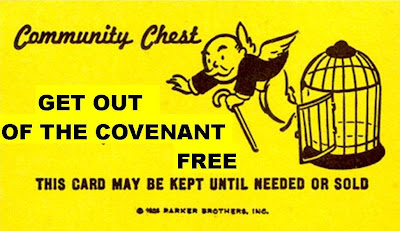 Yes, the Church of England Synod this week (11/24 to be precise) voted to continue to consider the proposed Anglican Covenant. But the Oxford Statement (issued on 11/24. Hmmmm ...) makes it PERFECTLY clear that when One has Sole Possession of The Absolute Truth then One has no need for consensus, collaboration, compromise or a Covenant. And One will certainly not attend meetings and sit down with those with whom One disagrees. In fact -- when all is said and done -- all One requires is Capitulation.

Some of us have (sadly) known that for a really long time. (And if anybody wants a window into how we've lived that sad reality out here in the Diocese of Los Angeles revisit my 2007 blog "Story Time.")

But that was then and this is now. And now that the folks the Anglican covenant was designed to keep at the table have turned their noses up at it it seems to me that sacrificing the vocations and relationships of the LGBT baptized on the altar of Anglican Unity becomes ... well, redundant at best. And throwing out historic Anglican comprehensivness in response to hysteric Anglican policitics becomes ridiculous at least.

And so it seems to me that as we -- TEC (The Episcopal Church) -- do our "due diligence" study of the Anglican Covenant what we need to be studying instead of something that's already failed to hold the Communion together is studying how to create something that will bring us together.

Like maybe focusing on the values that unite us rather than the issues that divide us. Like building a church for the 21st century that worries about who will COME if we proclaim the Good News of God available to all rather than who might LEAVE if we include everybody.

And now that we've got the "Get Out Of The Covenant, Free" card maybe we can start doing that work! So Gracias, GAFCON. (The thank you note is in the mail!)

*If you need GAFCON tutorial here's a link to a 2008 post about their 'Global Anglican Future' Conference from which I was honored to be banned.
Posted by SUSAN RUSSELL at 9:57 AM

I love that you find hope in all this craziness ... thanks

The GAFCON folks' plan from Day One has been to leave, preferably with the silver. If handed Gene Robinson's head on a platter as a sign of contrition, they would still find some reason why it wasn't good enough.

I'm thinking about having a bunch of these printed up with the quote from the Oxford Statement on the other side and handing them out to anybody who thinks this Covenant is a good idea.

And as I just got an email from a bewildered Brit ... let me note for anybody who HASN'T played Monopoly ... the old school board game ... the "Get out of Jail, Free" card is but one that you can pull off the stack as you try to work your way around the Monoploy Board and beat your opponents into oblivion by buying up all the property in town and raising the rent in order to bankrupt them.

Charming game, really. No wonder we're in such a muddle.

You SHOULD get them printed! It's a brilliant graphic.

Well I think I've finally come to the point of taking this blog as well off my list. It has become just as divisive and hateful as so many others. I do think the Monopoly game is a fitting analogy.

I bid you well and hope that whatever "game" you are trying to "win" ends however it is meant to end.

I'm just back to the Episcopal Church after having been away for eleven years, so much of this has me scratching my head. But this post and the 2008 post help provide some clarity. So thanks for that.

This is probably a stupid question, but what exactly is GAFCON? (Or do I want to know the answer to that question?)