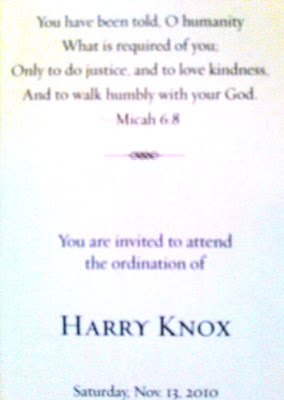 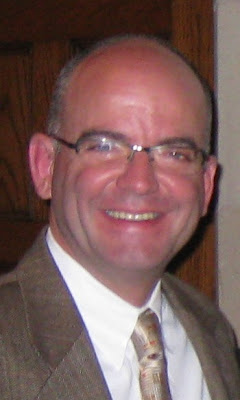 If I could be in two places at one time today, one of me would be in Washington DC right now at the ordination of my friend Harry Knox.

Over the years I've had the privilege of standing back and watching Harry work some major miracles.

I was honored to be asked to be part of one of Harry's brainchildren ... the HRC Religion Council ... and have seen firsthand the healing and hope the witness of that truly phenomenal bunch of faith leaders have offered to the struggle for LGBT justice.

I've watched as over and over again as Harry Knox "made a way where there was 'no way'" and built bridges where others said they couldn't be built -- across cultural, contextual and theological differences and most impressively, across the chasm between faith based and secular activists.

The partnership between HRC and faith leaders has become a model for how our movement for justice and equality for LGBT people can not only continue to move legislation forward in the halls of Congress but how we can move hearts and minds in middle America. And Harry made that happen.

Not alone. He has had great HRC staff colleagues (in particular Dr. Sharon Groves who is a brilliant, savvy, faithful force-of-nature in her own right!) and much good will and support from all those committed to this mutual calling to speak out, stand up and work for liberty and justice for all.

But sometimes ... many times ... it was Harry. Harry standing up at the end of a long day and the end of a long conference table and saying, "Now friends ..." (in the tone of voice we all came to recognize) in order to get us back on course. Back on message. Back with our shoulders to the wheel to get whatever ox it was that was in the ditch that day OUT of the ditch and get us all back on the road we were on together. (And to remember that we were ON it "together!")

This morning Harry Knox takes a major turn on the road of his own spiritual journey. He's on the on-ramp ready to accelerate onto a brand new "superhighway" as he joins the ranks of the ordained ministry and assumes a new set of challenges and opportunities as Senior Pastor of Resurrection MCC Church in Houston, Texas.

Harry's been called to ordained ministry since Jesus was in the youth group, but its been quite a journey for "the church" to catch up with the Holy Spirit. And this morning at 10am at the Metropolitan Community Church on Ridge Street in Washington DC that's exactly what happened. And if I could have been two places at one time, one of me would have been there to celebrate. But since that's not possible, this blog will have to suffice as "cyber celebration."

And "Now, friends ..." let us pray for Harry on this, his ordination day:

Holy God, we give you thanks for your servant Harry Knox and his faithfulness to your call to ordination as a pastor to your people. Make him a faithful pastor, a patient teacher, and a wise councilor. Grant that in all things he may serve without reproach, so that your people may be strengthened and your Name glorified in all the world. All this we ask through Jesus Christ our Lord, who with you and the Holy Spirit lives and reigns, one God, for ever and ever. Amen.