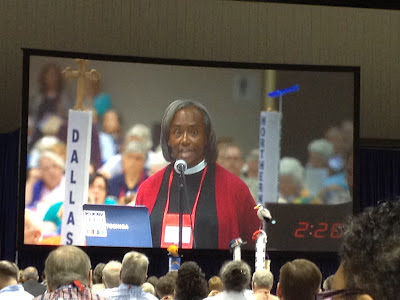 Today the Episcopal Church "put the T in equality" by explicitly including transgender people in the work and witness of the Episcopal Church and as candidates to the ordained ministry. In voting to concur with the earlier actions of our bishops, the House of Deputies officially added gender identity and gender expression to the non-discrimination canons - making today a very good day to be an Episcopalian.

And it is not just a good day for transgender Episcopalians and their friends, families and allies. It is a good day for all of us who are part of a church willing to the risk to continue to draw the circle wider as we work to live out our call to make God's inclusive love known to the whole human family.

In her sermon Sunday morning, Presiding Bishop Katharine Jefferts Schori challenged all of us who gathered as the General Convention community - bishops, deputies, volunteers and visitors - to step over the fence between fear and possibility. And in today's vote for inclusion, the Episcopal Church did precisely that. Just as we stepped over the fears surrounding the ordination of women in the 1970's and the fears of the ordination of gays and lesbians in the 1990's, today we stepped over the fear of our transgender brothers and sisters and into the possibility that at long last the end of the "inclusion wars" are in sight.

Now, before you jump to the comments to remind me we're not done with sexism or homophobia in the church let me assure you I know that far too well. Yes, we still have plenty of work to do to make all the resolutions of our conventions realities in our communities. Nevertheless, today's actions represent a significant step forward as we continue to live out our vocation as a church committed to respecting the dignity of every human being - and so there is much to rejoice and be glad in.

One of the five benchmarks of mission adopted by our wider Anglican Communion family - is "to seek to transform unjust structures of society." As Episcopalians we have been striving to live out that mission in the work of transforming the unjust discrimination against our transgender brothers and sisters.The last time our General Convention met (in Anaheim in 2009) we adopted some important resolutions supporting the trans-inclusive federal ENDA (Employment Non-Discrimination Act) and Hate-Crimes bills, adding gender identity and expression to nondiscrimination canons for lay employees and calling for church data forms to provide for inclusive self-identification.

And now -- because of today's landmark decision by our General Convention we can advocate from a place of integrity, knowing that the change we want to see in the world has begun in us - in our canons, in our structures, in our church.

Today the Episcopal Church put the "T" in equality. Let the people say "Amen" and "Alleluia!"

Posted by SUSAN RUSSELL at 1:55 PM