Reach for the Stars: The Legacy of Sally Ride 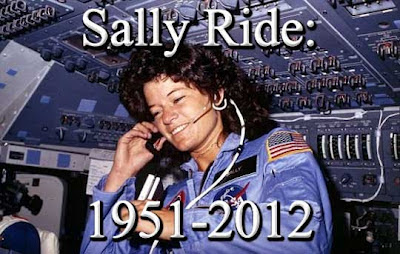 The news of the passing of Sally Ride -- a bona fide American hero and our first woman astronaut -- struck home here at All Saints Church in Pasadena as not just a public loss but as a personal grief. Sally's mother and sister are much-loved members of our parish community, and so her death after a valiant fight against pancreatic cancer took not only an iconic figure in our collective history but a member of our extended family.

The day after her loss, Sally's sister Bear shared some thoughts about her sister's life and death with us -- and I offer those here with her blessing:


Sally Ride was the first American woman to go into space and she was my big sister. Sally died peacefully on July 23 after a courageous 17-month battle with pancreatic cancer. I was at her side. We grew up in Encino, Calif. Our parents, Joyce and Dale Ride encouraged us to study hard, to do our best and to be anything we wanted to be. In 1983, Newsweek quoted our father as saying, "We might have encouraged, but mostly we just let them explore."

Our parents encouraged us to be curious, to keep our minds and hearts open and to respect all persons as children of God. Our parents taught us to explore and we did. Sally studied science and I went to seminary. She became an astronaut and I was ordained as a Presbyterian minister. Sally lived her life to the fullest with boundless energy, curiosity, intelligence, passion, joy, and love. Her integrity was absolute; her spirit was immeasurable; her approach to life was fearless. Sally died the same way she lived: without fear.

Sally's signature statement was "Reach for the Stars." Surely she did this and she blazed a trail for all the rest of us. My sister was a very private person. Sally had a very fundamental sense of privacy. It was just her nature -- maybe because we're Norwegians, through and through. People did not know she had pancreatic cancer and so this is bound to be a huge shock. For 17 months, nobody knew -- and now everyone knows. Her memorial fund is going to be in support of pancreatic cancer.

Most people did not know that Sally had a wonderfully loving relationship with Tam O'Shaughnessy for 27 years. Sally never hid her relationship with Tam. They were partners, business partners in Sally Ride Science; they wrote books together and Sally's very close friends, of course, knew of their love for each other. We consider Tam a member of our family. I hope the pancreatic cancer community is going to be absolutely thrilled that there's now this advocate that they didn't know about.

And, I hope the LGBT community feels the same. I hope it makes it easier for kids growing up gay that they know that another one of their heroes was like them.

I hope so, too. I hope that this great American hero -- the woman who inspired a generation of girls to reach for the stars in math and science -- will also inspire a generation of LGBT youth to reach for the stars in their lives and relationships.
I hope her example of 27 years of faithful commitment to the love-of-her life will demonstrate that it is indeed possible to balance career and family -- to make a difference and to make a home.

And finally, I hope that her legacy will contribute not only to curing pancreatic cancer but to healing homophobia. The greatest tribute we can pay to the work and witness of Sally Ride is to follow her example in living our lives with as much energy, curiosity, intelligence, passion, joy, and love as we can muster -- and to be curious, keep our minds and hearts open and to respect all persons as children of God -- because we don't have to be astronauts to reach for the stars.
Posted by SUSAN RUSSELL at 2:51 PM

"I was ordained as a Presbyterian minister"

I take it she whom the Presbyterian's rejected, All Saints welcomed?