"The job of the Christian patriot is to never give up work or hope that all value of "all people created equal" is obtainable in history." -- Ed Bacon, July 1, 2012

I'm sitting in an Indianapolis hotel room after a LOOOOOOONG day of travel that began with an o'dark thirty flight out of LAX and concluded with a just-completed Team Integrity General Convention 2012 briefing. It has been such a full day that it hardly seems possible to me that this picture was taken yesterday. But it was. 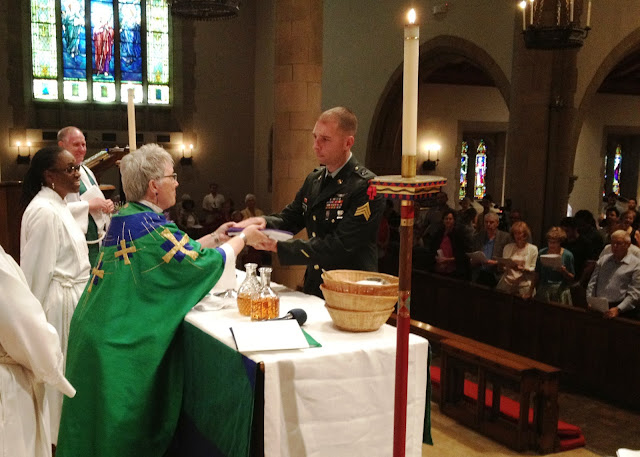 That's me receiving a folded American flag from my son Jamie (AKA Sgt. James W. Russell, USAR/AKA "Jim") as part of annual pull out all the stops All Saints Church, Pasadena celebration of Independence Day Sunday. It is the Sunday when the rector's offertory sentences explain how just as we offer the bread and wine to be transformed into the holy food of new and unending life and we offer our money to be transformed into mission we also offer the flag as a symbol of our commitment to being a nation where all are treated and created equal. Arguably my favorite Sunday of the year.

It is a Sunday we hear not only from ancient prophets but from contemporary ones:

Moses said to Israel, “For the Lord your God is God of gods and Lord of lords, the great God, mighty and awesome, who is not partial and takes no bribe, who executes justice for the orphan and the widow, and who loves the strangers, providing them food and clothing. You shall also love the stranger, for you were strangers in the land of Egypt. You shall fear the Lord your God, worship the Lord, hold fast to the Lord, and take your oaths in the Lord’s name. The Lord is your praise, your God, who has done for you these great and awesome things that your own eyes have seen.” -- Deuteronomy (10:17–21)

America began… as a half-formed and rough idea, but that idea became the meaning against which all life in this country has been measured ever since. And what is that idea? It comes to us by now as the brilliant cliché of the Fourth of July, but with stark simplicity it still defines the ground of our being: “All men are created equal.” That the idea is dynamic, propelling a permanent social transformation, is evident even in the way that word “men” strikes the ear as anachronistic now. That Jefferson and the others were not thinking of women matters less than the fact that they established a principle that made the full inclusion of women inevitable. And so with those who owned no property, and those who were themselves owned property. How new is this idea today? Its transforming work continues all around us. ... US politics is obsessed with the question of the place of immigrants, legal and illegal. The mainstream argument takes for granted that even here liberalizing change is underway. Confronted with an “illegal” person, the law must still give primacy to personhood. And, on another front, is it an accident that American Episcopalians are the ones challenging the world Anglican body on the question of equality for gays and lesbians?… After all, to be an American traditionalist – and isn’t this what we universally celebrate on the 4th of July? – is to affirm the revolution. --An excerpt from “What We Love about America,” by James Carroll (2006)

And a Gospel particularly germane in an election year on the Sunday before you leave for the 77th General Convention of the Episcopal Church.

Jesus said, “You have heard it said, ‘Love your neighbor but hate your enemy.’ But I say to you, love your enemies and pray for those who persecute you. This will prove that you are children of God. For God makes the sun rise on the evil and on the good alike, and sends rain on the just and the unjust. If you love only those who love you, what merit is there in that? Do not even the tax collectors do as much? And if you greet only your friends, what is exceptional in that? Do not even the pagans do that much? Let the love you extend be full just as the love God extends is full.” -- Matthew (5:43–48).

"The job of the Christian patriot is to never give up work or hope that the value of "all people created equal" is obtainable in history," said Ed Bacon in his sermon. (Which you can watch here)

We'll spend a lot of time talking about a lot of things here in Indianapolis. And my prayer for our church today is like unto Ed's prayer for our nation yesterday: may we never give up work or hope that that the Good News of God's inclusive love made available to all is obtainable in history. And may we be co-creators with God in making that kingdom come on earth as it is in heaven not just the prayer we pray but reality we work toward as we go about the work of this 77th General Convention of the Episcopal Church.
Posted by SUSAN RUSSELL at 7:05 PM