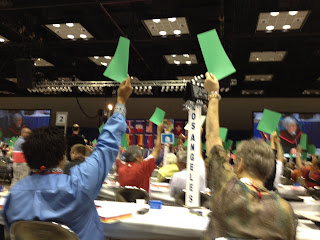 We are on a 15 minute break so I'm throwing up this "breaking news" blog about one of the first resolutions to make it through both houses of the 77th General Convention of the Episcopal Church ... putting us on the right side of history and in alignment with the Anglican Mark of Mission: "To seek to transform unjust structures of society."


Resolved, That the 77th General Convention encourage dioceses and congregations to pray for, support, and advocate for the immigrants, refugees, and strangers in their communities, including lesbian and gay families facing unwanted moves, deportation or being split apart due to unequal treatment of same-gender couples under federal immigration law.