Did he or didn't he? 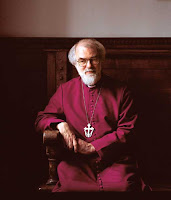 Conflicting reports from across the pond on the Archbishop of Canterbury's role in the attempt of the Diocese of San Joaquin to secede from the Episcopal Church.
.
An ENS report quotes Bolivian Bishop Frank Lyons from the Southern Cone as saying Williams approved of the new affiliation and described it as "a sensible way forward."
.
Meanwhile, Kenneth Kearon, Anglican Communion secretary general, offered a different "take" in the same article: "I would be surprised to hear that the Archbishop would formally support such a development which is contrary to the Windsor Report."
.
So ... did he or didn't he?
.
Episcopal Cafe has the scoop -- the breaking news -- the Anglican Schism Update Du Jour:
.
He didn't.

"Archbishop of Canterbury Rowan Williams has not in any way endorsed the actions of the Primate of the Southern Cone, Bishop Gregory Venables, in his welcoming of dioceses, such as San Joaquin in the Episcopal Church, to become part of his province in South America," a spokesman for the Anglican Communion said. (Via email from The Rev. Canon Dr. James M. Rosenthal, Anglican Communion Office, Director of Communications.)

So there you have it. It's about as clear a statement as one gets these days from Canterbury. Is it going to put an end to the ridiculous claims by Schismatic bishops that they are somehow "entitled" to property that doesn't belong to them as they scheme to subvert the constitution and canons of the church they vowed to guard the faith, unity and discipline of when they were consecrated?
.
My money's on "not bloody likely." Because, at the end of the day, it really isn't about faith or unity or discipline -- it's about power. And it's about time for more clear statements from Canterbury that it's about time for the temper tantrum to end and for those who want to walk together as diverse members of the global Anglican Communion to get on with the business of walking forward in faith and for those want to walk apart to hit the road.
.
Posted by SUSAN RUSSELL at 7:56 AM

Right on Susan! Your last paragraph says it all.

Thanks for the Update, Susan. I wish the folks in Canterbury would always be so forth coming. I couldn't agree with you more.

I keep thinking of a petulant little kid who keeps yelling "I'm running away! I really am! I'm leaving home" Really! You'll see!". And eventually some of them do. I predict they won't enjoy whatever is next for them nearly so much as they did threatening to leave.

The notion that the ABC had anything to do with the actions of San Joaquin, one way or another, is a pipe dream. This ABC has done nothing but sit around wringing his hands since the day +Gene Robinson was elected Bishop in NH. To assume he took ANY kind of leadership role is ridiculous. He hasn't shown any yet and I'd bet the church silver on the fact that he won't start exercising any leadership now. He's an embarrassment to the Communion.

Susan, I love you dearly and for that reason, I hope profoundly that you are not holding your breath waiting for ++Canterbury do do anything!

There is a distinction between institutional churches and "the Church" of which all Christians are part by virtue of their baptism. I really don't think Jesus intended for us to have all these denominations and subdenominations with each group holding their nose when encountering another. The agenda for the Kingdom of God is not endless subdivisions. It is about handling the important issues for Christians, such as ending poverty, stewardship of our resources, peaceful resolution of disputes, eliminating oppression, and of course, Solemn High Mass with lots of incense every Sunday in every church. I wish we could all concentrate on the foregoing things and stop fighting about the gender and sex lives of our clergy. Eventually many of the departers will find their way back to us. They will figure out the grass is not greener on the intolerant side of the fence. Intolerance is sin and because it is, it will die. The way forward is not to dignify their actions with continuing publicity but to go on about our business in bringing God's kingdom, about doing God's will on earth as it is in heaven (don't forget, Susan, that unlike All Saints, there's incense in Heaven 24/7).

Issues, we have issues. First, this is about as close to leadership as Dr. Williams gets. I am amused to think he did not tell TEC it is in a crucified place fasting.

Which leads to another -- I want to support the national response, I really do. If I thought I could trust it, I would. But, B033, "fast" and "crucified place" leave me in great doubt. And our president's comments on the loyal carrying their own way, given the power invested in our bishops is really a forth straw.

The leadership has a lot to prove. If Mr. Schofield is not in court in December and deposed as well, frankly, there is not gonna be much of an army back here when they finally shout charge.

In my darker moments I doubt they care. ;;sigh;;