Episcopal News Service (ENS) has a great overview of last week's Chicago Consultation online today. The title of the article -- International Anglican group initiates "strategy of inclusion" -- pretty much summed up the agenda of the fifty-something invited participants who gathered at snowy Seabury-Western for three days of conversation and consultation.
. 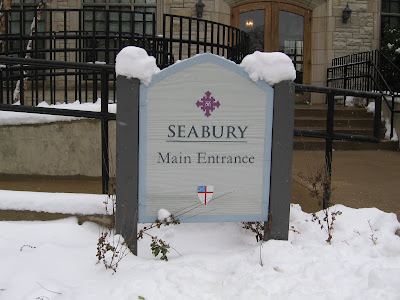 My earlier blog on the gathering covered the basics, but here's just a bit more follow up, including a glimpse of the "winter wonderland" that Chicagoans assure me was just a "dusting of snow" but seemed like a lot to me ... 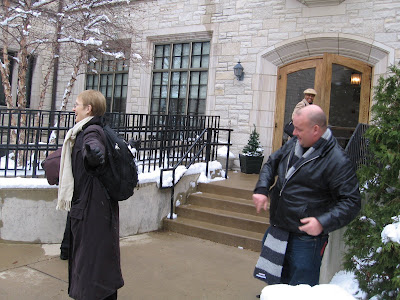 ... and was sufficient to lead into temptation the Vicar of Putney, caught here pitching a snowball at the rucksack of the Regius Professor of Divinity at Oxford College.
. 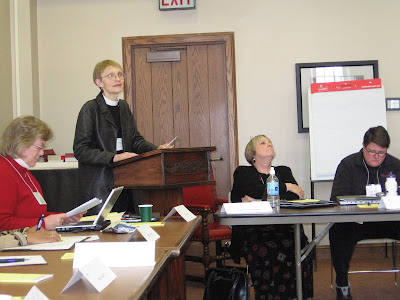 Recovering admirably from the ignoble attack on her person and dignity, McCord Adams presented her paper, "Shaking the Foundations" to the gathered conference.
. 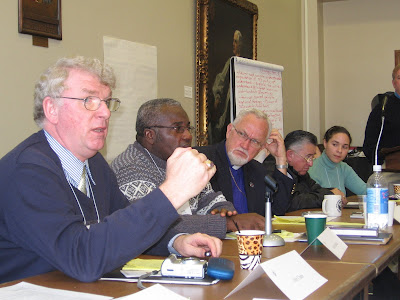 Other "Kodak moments" were the presentation by representative Anglican voices from Canada, Ghana, Brazil and Central America in the meeting room ... . 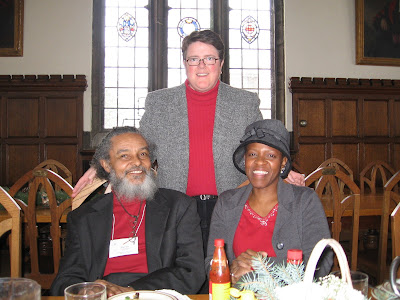 ... and this celebration of serendipitous wardrobe synchronicity in the dining hall. 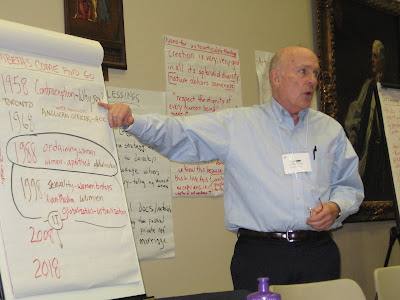 One of the great treats for me was the chance to spend some time with my former bishop, Fred Borsch -- who gave us all a great "History of Lambeth 101" overview from the considered perspective of one who has "been there and done that" several times.
. 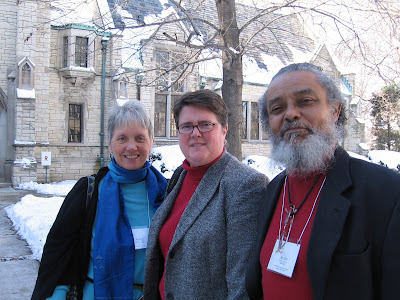 Finally, one more not-so-candid shot outside the hall -- what a privilege to be part of such a great, forward thinking bunch of faithful Anglicans!

From the ENS article:
.
Participants focused particular attention on building international coalitions to work against what the Rev. Mpho Tutu, executive director of the Tutu Institute for Prayer and Pilgrimage in Alexandria, Virginia, called "interlocking oppressions." Tutu described what she called a web of economic, political and social factors that determine who has access to power, resources and social approval, and who does not, according to the release.
.
"The issue is human suffering and the attitudes that cause it," said Bishop Celso Franco de Oliveira of Rio de Janeiro.
.
Before adjourning, the release said, the group made plans to:
.
* publish several of the papers it received on the website Episcopal Café;
* establish its own website;
* hire a part-time coordinator; and
* support working groups on communications, fundraising and organizational strategy, as well as a group to identify and produce theological resources.
.
The consultation includes two Primates of the Anglican Communion -- Archbishop Martin de Jesus Barahona of Central America and Archbishop Carlos Touche-Porter of Mexico, who was unable to attend due to illness; 12 bishops from the Episcopal Church, including 10 diocesan bishops or bishops-elect; four members of the Church's Executive Council; numerous General Convention deputies, and representatives of groups such as Integrity USA, Claiming the Blessing and Inclusive Church.
=============
And ...
... la lucha continua!

Posted by SUSAN RUSSELL at 2:56 PM